The Main North Line (also known as the Great Northern Railway) is a major railway in New South Wales, Australia. It runs through the Central Coast, Hunter and the New England regions. The line was the original main line between Sydney and Brisbane, however this required a change of gauge at Wallangarra. The line is now closed north of Armidale, and the main route between Brisbane and Sydney is now the North Coast line.

The line starts as a branch from the Main Suburban line at Strathfield in Sydney. The line heads north as a double track electrified line through the northern suburbs of Sydney, crossing the Hawkesbury River, before passing through the Central Coast.

The line then swings westwards as four tracks (two main line and two coal roads) through the outer suburbs of Newcastle to Maitland. Maitland is the junction of the North Coast line which continues to Brisbane. The line becomes double track immediately west of Maitland and heads through the Upper Hunter Valley through the townships of Branxton and Singleton before reaching Muswellbrook. The line is presently single track from Antiene to Muswellbrook, but Australian Rail Track Corporation are altering the layout of the Muswellbrook yard in preparation for duplication of this section.[1]

Muswellbrook is the junction point for the cross country goods line to Sandy Hollow and Gulgong. The Main North continues northwards through the Ardglen Tunnel to Werris Creek, where the Mungindi Line branches off northwest to Moree, and a cross country branch continues to Binnaway and ultimately Dubbo.

The line continues north, but sees limited traffic from Werris Creek northwards. The line reaches the major New England towns of Tamworth and Armidale, the latter being the northernmost extent of service on the line. Until the mid-2000s freight traffic continued to the disused station at Dumaresq (a township a few kilometres north of Armidale) which is home to a now-also-disused agricultural fertilizer depot. There is now wire across the corridor at several points between Armidale and Dumaresq, after which the line is for all intents and purposes closed onwards to Wallangarra. A baulk is placed across the tracks at kilometre 590 (a short distance on from Dumaresq), and north of Glen Innes the line - particularly its bridges - has fallen into considerable disrepair. 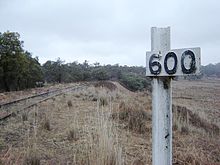 An abandoned section of the Main North Line north of Armidale, New South Wales. Also showing is the post marking the distance from Central Station, Sydney

The first section of the Main North Line was built from the port of Newcastle to Victoria Street, Maitland in 1857[2] and extended to Singleton in 1863, Muswellbrook and Murrurundi in 1872, Werris Creek and west Tamworth in 1878, Armidale in 1883 and Wallangarra, Queensland in 1888.[3]

Several lines branch from the Main North Line, including:

CountryLink operates passenger services along the Main North line. A daily Xplorer diesel self-propelled train operates to Werris Creek before dividing into two sections, one operating along the Main North Line to Armidale, and one section operating along the North-West (Mungindi) line to Moree. CityRail operates electric suburban passenger services over the suburban section between Strathfield and Berowra, and inter-urban passenger services between Sydney and Newcastle. It also operates diesel self propelled regional railcars between Newcastle, Maitland, Scone and Dungog. The section between Strathfield and Maitland forms part of the trunk line between Sydney and Brisbane and sees intermodal goods traffic carried between the two cities. The section of line in the Hunter Valley sees intensive coal train working, in fact the section between Broadmeadow and Maitland is one of the busiest goods lines in Australia.

Developments in the 20th century

The line was hampered by the rugged terrain and a change of gauge at Wallangarra for traffic to Queensland. The line was supplanted as the principal route to Brisbane by the completion of the North Coast Line in 1930. Despite being bypassed, the line remained busy for many years afterwards, with the line instead becoming the major freight link to the wheat and wool regions of northern and north-west New South Wales.

In 1988, the New South Wales government abandoned the line between Tenterfield and Wallangarra. The line was later abandoned to as far south as Tamworth before services were returned to Armidale in 1993. Since that time, there have been attempts to revive freight or tourist traffic to as far as Glen Innes, although these plans have not yet succeeded.

Today, the line is used for both freight and passenger traffic. The busiest sections are in the Hunter Valley and Central Coast regions, with services to the New England being less frequent. Passenger services are provided by CountryLink, with daily Xplorer services running from Sydney to Armidale and Moree. Freight services are provided by a number of companies, with Pacific National being the largest user on the line.

The Sandgate Flyover was constructed in 2006 to allow the two passenger/freight tracks to rise and pass over the coal tracks that branch off to Kooragang Island in order to eliminate a capacity restriction caused by the long coal trains crossing the other tracks at grade. Because of the location of the overpass relative to the branch to Kooragang Island, a short section of the line has 6 parallel tracks. The bridge carrying Sandgate Road over the lines had to modified to allow for the additional lines. Sandgate railway station is flanked by a pair of coal tracks on each side.