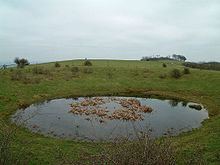 A dew pond is an artificial pond usually sited on the top of a hill, intended for watering livestock. Dew ponds are used in areas where a natural supply of surface water may not be readily available. The name dew pond (sometimes cloud pond or mist pond) is first found in the Journal of the Royal Agricultural Society in 1865.[1] Despite the name, their primary source of water is believed to be rainfall rather than dew or mist.[2] 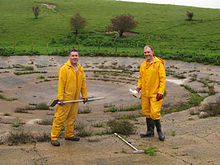 They are usually shallow, saucer-shaped and lined with puddled clay, chalk or marl on an insulating straw layer over a bottom layer of chalk or lime.[4] To deter earthworms from their natural tendency of burrowing upwards, which in a short while would make the clay lining porous, a layer of soot would be incorporated[5] or lime mixed with the clay.[6] The clay is usually covered with straw to prevent cracking by the sun[6] and a final layer of chalk rubble or broken stone to protect the lining from the hoofs of sheep or cattle.

A method of constructing the base layer using chalk puddle was described in The Field 14 December 1907. A Sussex farmer born in 1850 tells how he and his forefathers made dew ponds:

If the pond's temperature is kept low, evaporation (a major water loss) may be significantly reduced, thus maintaining the collected rainwater.[citation needed] As the water level in the basin falls a well of cool, moist air tends to form over the surface, restricting evaporation.[7] 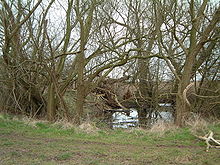 The mystery of dew ponds has drawn the interest of many historians and scientists, but until recent times there has been little agreement on their early origins. It was widely believed that the technique for building dew ponds has been understood from the earliest times, as Kipling tells us in Puck of Pook's Hill.[8] The two Chanctonbury Hill dew ponds were dated, from flint tools excavated nearby and similarity to other dated earthworks, to the neolithic period. Landscape archaeology too seemed to demonstrate that they were used by the inhabitants of the nearby hill fort (probably from an earlier date than that of the surviving late bronze age structure) for watering cattle.[9][10] A more prosaic assessment from Maud Cunnington, an archaeologist from Wiltshire, while not ruling out a prehistoric origin, describes such positive interpretations of the available evidence as no more than “flights of fancy”.[11] A strong claim to antiquity may, however, be made for at least one Wiltshire dew pond: A land deed dated 825 CE mentions Oxenmere (51°22′33″N 1°50′54″W﻿ / ﻿51.375960°N 1.848221°W﻿ / 51.375960; -1.848221) at Milk Hill, Wiltshire, showing that dew ponds were in use during the Saxon period.[11][12] The parliamentary enclosures of the mid eighteenth to mid nineteenth centuries caused many new upland ponds to be made, as access to traditional sources of drinking water for livestock was cut off.[13] The naturalist Gilbert White noted that during extended periods of summer drought the artificial ponds on the downs above his native Selborne, Hampshire, retained their water, despite supplying flocks of sheep, while larger ponds in the valley below had dried up.[14] Later observations demonstrated that during a night of favourable dew formation a typical increase in water level of some two or three inches was possible.[9]

There is equal controversy on the means of replenishment of dew ponds. Experiments conducted in 1885 to determine the origin of the water found that dew forms not from dampness in the air but from moisture in the ground directly beneath the site of the condensation: dew, therefore, was ruled out as a source of replenishment.[5] Other scientists have pointed out that the 1885 experiments failed to take into account the insulating effect of the straw and the cooling effect of the damp clay: the combined effect would be to keep the pond at a lower temperature than the surrounding earth and thus able to condense a disproportionate share of moisture.[9] In turn these conclusions were disproved in the 1930s, when it was pointed out that the heat-retaining quality of water (its thermal capacity) was many times greater than that of earth and therefore the air above a pond in summer would be the last place to attract condensation. The deciding factor, it was concluded, is the extent of the saucer-shaped basin extending beyond the pond itself: the large basin would deliver more rainfall than a pond created without such a surrounding feature.[15]

Dew ponds are still common on the downlands of southern England, the North Derbyshire and Staffordshire moorlands and in Nottinghamshire.

How to build dew ponds