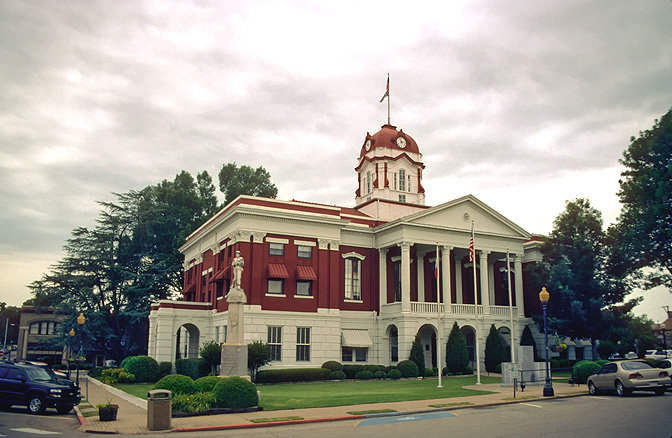 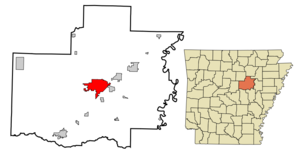 Searcy (local pronunciation: "SUR see") is the largest city and GR|6 of White County, , . According to 2006 Census Bureau estimates, the population of the city is 20,663.

Searcy is the home of , a private college affiliated with the and the state's largest private university. Harding College (its original name) moved to Searcy from in 1934, having bought the campus of the defunct Galloway College, a Methodist college for women.

Regional ice cream producer and distributor has its headquarters in the city's downtown area.

According to Dr. Raymond Muncy's "Searcy, Arkansas: A Frontier Town Grows up with America", Israel Moore, who had traveled west from Philadelphia, was in charge of laying out Searcy's original streets, and "he proceeded to name the major streets of Searcy for those of downtown Old Philadelphia near Independence Hall; Race, Arch, Market, Vine, Spring, and the tree-honoring streets of Cherry, Spruce, Locust and Pine." In 1957, Searcy named Moore Street after this 19th-century founder.

Perhaps coincidentally, Spring Street (along with downtown Searcy's Spring Park) also suggests some reference to earlier days of settlement in the Searcy area, when the community was known as White Sulphur Springs. As early as 1834, local springs with purported therapeutic properties initially drew visitors to the area, similar to the popular attraction to .

During the , the was fought near Searcy, though the exact site is disputed. Searcy Landing, on the , is the final resting place for some unfortunate Yankee soldiers.

On , , 53 contract workers were killed in a fire in the Titan outside of Searcy, in one the largest industrial accidents in US history. You may see the site in this video as it is in 2008 over 40 years after the disaster at this [http://www.metacafe.com/watch/1123920/exposing_hidden_titan_ii_launch_complex_373_4/ link ]

Despite losing many factory jobs, Searcy has recently experienced an economic revitalization, driven in large part by the leasing of much of the area's mineral rights by natural gas companies. Some residents, however, have noted concerns about the environmental impact of these extensive drilling projects (Hambrick "Natural State No More").

Searcy is served by two public school districts. Searcy Public Schools — including Searcy High School, three elementary schools and middle and junior high campuses — serve all but the far eastern portion of the city. That portion of the city is within the Riverview School District — a consolidation of districts serving Kensett, Griffithville, Judsonia, and surrounding communities in southeastern White County extending to West Point and Georgetown. Previously, the Riverview portion of Searcy was part of the Kensett school district; Riverview High School was built in eastern Searcy following the consolidation.

Founded in 1924, , a private Christian university affiliated with the , has its main campus in Searcy. Harding moved in 1934 from Morrilton to Searcy, where the university has evolved and expanded to include more than 200 acres and offers more than 90 majors in 10 undergraduate degrees, 13 preprofessional programs, and 12 graduate programs. At nearly 6,500 students, Harding University is the largest private university in Arkansas.

Harding Academy is a K-12 college preparatory school in Searcy enrolling more than 600 students. Harding University oversees the school, which resides adjacent to its campus.

Arkansas State University Searcy, formerly operating as Foothills Technical Institute, is a technical campus of nearby offering several two-year programs. In order to create drilling jobs for the benefit of the local populace, ASU-Searcy has partnered with the natural gas industry that is currently exploiting local natural resources (Willems).

There were 6,822 households out of which 28.5% had children under the age of 18 living with them, 51.8% were married couples living together, 10.8% had a female householder with no husband present, and 34.1% were non-families. 29.5% of all households were made up of individuals and 13.1% had someone living alone who was 65 years of age or older. The average household size was 2.32 and the average family size was 2.86.