Coat of arms of Berlin

Coat of arms of Berlin

The coat of arms of Berlin is used by the German city state as well as the city itself, while Berlin's various boroughs use their own emblems. The bear was not the original symbol of the city, but instead had to 'struggle' to establish its place as such. For many centuries, the bear shared the spotlight with the eagles of Brandenburg and Prussia on Berlin's coats of arms and seals.

After the formation of the constitution of Berlin, the bear became the animal of coats of arms and seals. The state coat of arms depicted, in a silver (white) shield, a red armed and red tongued, upright, grunting bear.

When more and more cities were being founded in the 12th and 13th centuries, cities wanted official seals and later their personal coat of arms to seal official documents such as covenants or orders. A seal or coat of arms was usually awarded by the sovereign. Berlin and Cölln (not to be confused with Cologne) as well as the surrounding cities of the Margraviate of Brandenburg were governed by the Brandenburg Margraves, whose symbol was the red eagle. The oldest preserved and known seal of Berlin is from 1253. It depicts the Brandenburg Eagle spreading its wings in a clover-shaped archway. The text on the seal is SIGILLVM DE BERLIN BVRGENSIVM (seal of Berlin's citizens). It supposedly was the seal of Berlin's first mayor Marsilius. 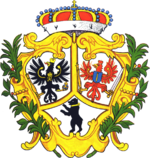 The usual coat of arms, in use in different styles until the year 1920, showed the Prussian eagle in the first field, the eagle of Brandenburg in the second field and the bear in the third field.[1]

Berlin’s citizens, however, wanted their own symbol and coat of arms. How or why they chose the bear remains unknown. Most likely they were thinking of Albrecht I, nicknamed "the bear", who is considered to have been the conqueror and founder of the Margraviate of Brandenburg. Another possibility is that Berliners decided on "speaking" arms since the first syllable of Berlin sounds like "Bär" (bear), although the two are not etymologically related. In medieval times "speaking" or canting arms were a favorite; people tried to depict names by use of phonetically similar symbols or rebuses. The name "Berlin" was created when slavic tribes settled in the area and means "place at the swamp" or "in a swampy area".[citation needed] Actually, a pearl may have been a more likely choice for canting arms given that the Middle High German word for pearl is "berle".[citation needed] Middle High German was the language spoken at the time and, indeed, pearls were often used in coats of arms.[citation needed]

To enable civilians and non-governmental institutions to express their affinity with Berlin, the Senate of the Interior and Sports provided a logo which features the arms' shield without the crown in black and white or coloured versions.