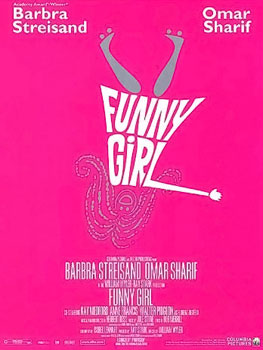 "Funny Girl" is a fy|1968 based on the stage musical of the same name. The semi- plot is based on the life and career of Broadway and film star and and her stormy relationship with and . Its original title was "My Man". The screen adaptation, directed by , paired with in the role of , while repeated her stage role, and was cast as .

The film was a commercial and critical success, gaining Streisand an . It became the top grossing film of 1968, and received seven nominations.

The plot follows that of the stage musical. It is set in and around just prior to and following . The story opens with "" star Fanny Brice, awaiting the return of husband Nick Arnstein from prison, and then moves into an extended of their story which is the bulk of the film.

The film is divided into two acts. In the first act Fanny is shown as a stage-struck teen who gets her first job in . She meets the sophisticated Nick Arnstein after her debut performance. They continue to meet occasionally over the years gradually becoming more romantically involved as Fanny's career flourishes and she becomes a major star. Eventually Arnstein seduces Fanny in Baltimore as they on the song, "You Are Woman, I Am Man". The first act finishes with Fanny deciding to give up her place in the Follies and follow her man. She brushes aside objections from her friends, and in a dramatic rendition of "", she is seen racing to catch the ship he has taken to earn his fortune.

The second act opens with the couple on the ship. Fanny reveals to Arnstein that she'd like to become a Sadie - her name for a married lady. Arnstein, however, needs to make his fortune from a poker game before he'll agree to marry her. Fanny cannot take the tension of the game and goes back to their cabin to await Arnstein who returns in the morning, calling her Sadie before revealing all the money he has won. They marry, move into an expensive house and have a baby girl. Fanny goes back on stage with Ziegfield, and life appears very rosy. However Nick's business ventures fail and they have to move into a smaller apartment. He refuses financial help from Fanny, instead getting involved in a bonds which goes bad and he is imprisoned for .

The film now returns to Fanny in the theatre awaiting Arnstein. When he arrives the couple agree to separate, and Fanny sings the closing song "My Man" with tears running down her face.

Development began when was asked by in the early 1960s to write the screenplay, and then and were hired to write the songs. A treatment of Lennart's script was used by as the basis for the stage musical which went out on Broadway while the film was still in development. was brought on board to direct, and was approached for the part of Fanny. Sondheim dropped out to be replaced as lyricist by , while Carol Heaney joined as . was Robbins' preferred choice for Fanny, but Bancroft wasn't happy with the songs, so and were considered. Robbins was unhappy with the script development and wanted Lennart fired. When Stark refused to fire Lennart, Robbins resigned, to be replaced by who got the relatively little known Barbra Streisand to play the leading part in her very first movie. Streisand said she would play the part "as herself" because she felt that she and Brice were "very much alike". [Louis Calta, New York Times, July 26, 1963] Fosse then left the project to be briefly replaced by after turned it down, before came on board and saw the project through to completion. [ [http://barbra-archives.com/Performances/streisand_funnygirl_broadway.html >> Barbra Streisand Archives | Funny Girl | Broadway ] ]

The film paired as with in the role of . repeated her stage role as Rose Brice, and was cast as , with in the added role of showgirl Georgia James, although most of her performance was left on the cutting room floor. The role of Mrs. Strakosh played by on stage went to . played Tom Branca, while was Keeney.

The film was a huge hit in theaters, and became the top grossing film of 1968. Streisand received a as Best Actress; nominations also went to the film, the title song, and Wyler. Lennart's screenplay won her recognition from the .

A 1975 sequel, entitled "", with in the role of Brice's second husband, , was considered inferior by most critics, but was still a commercial success.