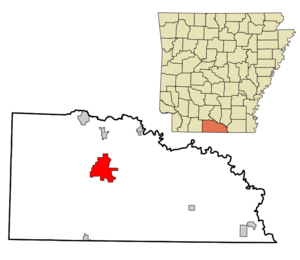 mapsize = 250x200px
map_caption = Location in Union County and the state of

El Dorado is the site for several annual events, including the Festival hosted by the South Arkansas Historical Foundation the first Saturday of each May (with a crawfish boil the same weekend), a Fantastic Fourth Celebration during July (including a 5k run, an antique car show, and fireworks), the SouthArk Outdoor Expo in September, the two-day MusicFest in October (with pop, rock, blues, and country performers, among other events), and various winter holiday events, including the largest parade in the state. The above mentioned Crawfish Boil has become so much more. It now hosts a "Battle of the Bands", a Bike show/one day motorcycle rally, a motorcycle parade, a Pool tournament, and much more. The official name of the event is [http://www.arkansas.com/calendar/event_detail.asp?id=25332 "Bugs, Bands, and Bikes".]

There were 8,686 households out of which 30.7% had children under the age of 18 living with them, 42.9% were married couples living together, 19.1% had a female householder with no husband present, and 34.0% were non-families. Of 8,686 households, 304 are unmarried partner households: 243 heterosexual, 19 same-sex male, and 42 same-sex female. (Note: Stigmatization of may prevent from reporting themselves as such on the US Census, especially in more conservative areas.) 30.7% of all households were made up of individuals and 13.6% had someone living alone who was 65 years of age or older. The average household size was 2.40 and the average family size was 2.99.

El Dorado is home to which offers mostly private aircraft, but also commercial service on one airline. [ [http://flightaware.com/resources/airport/KELD FlightAware > Resources > Airport > S Arkansas Regional Airport (El Dorado, AR) [KELD/ELD ] ] El Dorado has another airport closer into town called the Downtown Airport. This airport has planes that fly for oil and gas companies. People who also own small private planes lease or own their own hanger.

( [http://www.redriverradio.org] ) is a four station public radio network and NPR affiliate based out of Shreveport, LA. As part of the network, local station KBSA 90.9 FM became is the first HD Digital Radio broadcaster in the South Arkansas region. he station and network is supported primarily through listener and corporate contributions.

All three transmitters are located east of El Dorado, in . While KTVE no longer considers El Dorado their primary newsroom, the station is licensed to El Dorado by the FCC. The station moved primary operations to in 1988. KEJB is a fairly new station, having signed on the air in 2001. KETZ-DT signed on the air in May 2006. El Dorado is also served by KNOE 8 (CBS), 14 (FOX), and 11 (ABC) in nearby .

El Dorado is also served by the El Dorado News-Times, one of the oldest newspapers in South Arkansas as well as a free community newspaper The South Arkansas Leader which is owned and operated by broadcasters Noalmark Broadcasting Corporation.

* Known as Arkansas's boomtown because of oil discoveries in the 1920s and in 1937. Several oil refineries are based or started in El Dorado. [http://www.arkansasmediaroom.com/news-releases/printable_popup_botframe.asp?id=261]

, a S&P 500 company, has its corporate headquarters in El Dorado.