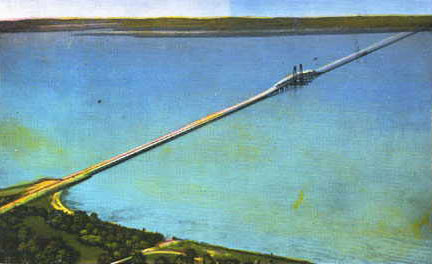 map_width=251pxThe James River Bridge is a four-lane across the James River in the of . Owned and operated by the , it carries U.S. Route 17, U.S. Route 258, and State Route 32 across the river near its mouth at . The bridge connects Newport News on the with Isle of Wight County in the region, and is the easternmost such crossing without a component.

When completed in 1928, the 4.5-mile (7 km) bridge was the longest bridge in the world over water.Fact|date=February 2007 The original two-lane bridge was replaced from 1975 to 1982 with a wider four-lane bridge that could handle increased traffic volumes. In 2005, the bridge carried an of about 30,000 vehicles per day.

Description of the current bridge

The roadway becomes Carrollton Boulevard on the Isle of Wight County end; after a number of intersections, US 258 and SR 32 turn west at Bartlett towards State Route 10 at Benns Church, while US 17 curves southeast towards Portsmouth.

The nearest upstream crossing of the James River is the (State Route 31); the next fixed crossing is the 1966 (State Route 156) at Hopewell. When the bridge opened in 1928, the next bridge upstream was the 1913 in Richmond.

s, s, and s are banned from using the bridge; the easternmost crossing for them is the , about 25 miles upstream. [ [http://www.virginiadot.org/programs/bk-info.asp VDOT Info & Service: Bicycling and Walking in Virginia] ] The State Highway and Transportation Commission banned these transportation modes from using the bridge in 1978 "in the interest of safety", due to high traffic and lack of s. [CTB minutes|09-1978-01, page 23] Once the replacement bridge was completed, they returned to the question in 1983, and decided to continue the ban, since the new bridge also had no sidewalks or sufficient . [CTB minutes|03-1983-01, page 21]

History: longest bridge in the world over water

The private James River Bridge Corporation was chartered by the General Assembly to build a system of bridges across the James River, , and , as well as approach roads. [CTB minutes|04-1927-02, page 2] On the Newport News end, the bridge simply ended at an intersection with State Route 39/U.S. Route 60 (Virginia Avenue, now Warwick Boulevard).

The $5.2 million James River Bridge was opened on , by the press of a button in , where U.S. President , sitting in the of the , sent an electric signal to lower into place the upraised lift span over the James River channel. [Hampton Roads Daily Press, [http://web.archive.org/web/20010617185024/http://hrticket.com/top/1,1419,N-HRTicket-History-X!ArticleDetail-6569,00.html The crossing of the James River] ] Drivers could now choose to cross Hampton Roads on a fixed bridge rather than one of many ferries. The new bridge was narrow by current standards, with a 20-foot roadway from curb to curb, and railings much less substantial than found on modern structures.Fact|date=February 2007 The main lift span was 300 feet (90 m) long; the other two bridges included 110-foot (34 m) bascule spans. [CTB minutes|10-1954-02, page 184] When completed, it was the longest bridge in the world over water.Fact|date=February 2007

As early as 1933, the State Highway Commission (SHC) considered taking over the bridge approaches - but not the bridges themselves - from the corporation. [CTB minutes|03-1933-01, page 17] Projected traffic volumes were not reached, leading to of the James River Bridge Corporation. It was bought by s, headed by a local businessman from Smithfield. The new owners raised tolls, proving unpopular with local residents.

However, in 1955, the state doubled tolls to $1.80 round trip for cars and $4.00 or more for trucks, in order to pay for repairs, new toll booths, and a new system compatible with the . The toll plazas, which had numbered three - one for each bridge - were consolidated to two, one at the south end of the main bridge and one at the north end of the . Thus the became free for local traffic. In addition, passenger vehicles and s only had to pay at the first booth they reached; large trucks and buses had to pay twice. This meant that light vehicles crossing only the main bridge (for instance between Smithfield and Newport News) only had to pay southbound.

of the local rerouted his trucks via a smaller, cheaper bridge owned by a Norfolk car dealer. Tolls were eventually dropped to 10 cents per axle, and later removed on , ; the state paid off the remaining bonds at that time. Simultaneously, the parallel opened, and tolls were removed from that facility, the , and the . [CTB minutes|05-1976-01, page 28] Many considered this an important step in the development of the area.

A new four-lane lift bridge was completed in stages from 1975 to 1982 at a cost of $75 million. The replacement was funded with es rather than s.Fact|date=February 2007 When the new bridge was completed, a short section of the old bridge on the Newport News side was retained for use as a fishing pier.