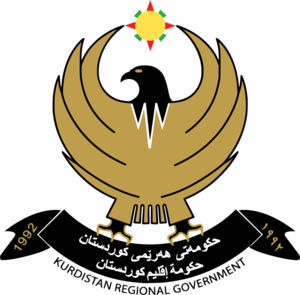 The Kurdistan Regional Government (KRG), (Kurdish: حكومه تى هه ريمى كوردستان, "Hikûmetî Herêmî Kurdistan", ) is the official ruling body of the predominantly Kurdish region of referred to as , or sometimes simply, Kurdistan. The KRG consists of a unicameral parliament with 111 seats known as the (KNA).

The cabinet is selected by the majority party or list who also select the president and prime minister of the Kurdistan region. The president of Kurdistan is the head of the cabinet and chief of state who delegates executive powers to the cabinet, while the prime minister is traditionally the head of the legislature body but also shares executive powers with the president. [ [http://www.krg.org/articles/kurdistan_regional_government_en.html Kurdistan Regional Government (KRG) ] ] Parliament creates and passes laws by a majority vote, and the president has the power to veto any bill.

Since 1992, the governing bodies have been primarily based in ( _ku. Hewlêr), officially declared the capital of the region. The KRG parliament, or the (KNA), is elected by popular vote. Voters are given one vote and may choose a single party from the list. The cabinet is selected by the majority party or parties. The majority party or coalition appoints the president and the main parties negotiate terms for the prime minister of the Kurdistan region.

Currently, the cabinet is composed of the largest two governing parties, the KDP and the PUK and their allies, which include and the Socialist Party of Kurdistan. The majority party or parties are also in charge of selecting the president, and negotiate terms for the prime minister.

The primarily goal of the 2005 elections was to end party-rule in the and unify the two major parties - the Kurdistan Democratic Party (KDP) and the (PUK) - who fought a civil war in the mid-1990s over territorial disputes and control of the Kurdistan region. Previously, the region was divided up by administrative provinces that were under control of either the KDP or the PUK. In 2004, the two parties created one unified list or coalition called the , which included several smaller parties as well. Not surprisingly, the coalition received the majority of votes (an overwhelming 90%) allowing the KDP and PUK to effectively divide key positions in government. The coalition achieved 104 of the 111 seats in parliament. [ [http://www.reliefweb.int/rw/rwb.nsf/db900sid/LSGZ-6VRD5U?OpenDocument Assessments: Iraq, Iraq: Sulaymaniyah Governnorate assessment report, Situation Reports: Iraq, Iraq: Sulaymaniyah Governnorate assessment report ] ]

After five long months of negotiations, the KNA appointed the head of the KDP, , as the president of the Kurdistan region. In June, the KNA held its first official meeting with Massoud Barzani as president. Another six months passed before the KNA finally agreed on administration positions. In 2006, the current government was selected with as prime minister. [ [http://www.reliefweb.int/rw/rwb.nsf/db900sid/LSGZ-6VRD5U?OpenDocument Assessments: Iraq, Iraq: Sulaymaniyah Governnorate assessment report, Situation Reports: Iraq, Iraq: Sulaymaniyah Governnorate assessment report ] ] The parties also negotiated terms for the prime minister. Nechervan Barzani, who is a member of the KDP, was expected to serve two years and would be replaced with a PUK candidate in 2008.

As late as December 2007, the PUK had not yet announced their candidate, and in January 2008, the KRG announced that Nechervan Barzani would remain the prime minister until the next election scheduled for 2010. The exact reasons for this decision were not revealed.

The KRG has assumed the role of a government in a federal region of Iraq. As stipulated by the Iraqi constitution, Iraq will be divided into federal regions that will handle their own domestic affairs while the Baghdad central government will deal with international affairs. The single most controversial issue regarding federalism is oil. The KRG under Nechervan Barzani has signed several oil contracts with foreign states, including companies in the United States. While the KRG asserts that such contracts are legal under Iraqi law and the constitution, many disputes remain.

The main Kurdish parties and cooperated with the US-led coalition during the that led to 's overthrow. Kurdish politicians were represented in the . On January 30, 2005 three elections were held in the region: 1) for Transitional National Assembly of Iraq 2) for Iraqi Kurdistan National Assembly and 3) for provincial councils. [H. Walker, T. Clark, "Election in Iraq - 30 January 2005:An Assessment", Journal of Asian Affairs, Vol.36, No.2, July 2005, p.182] The recognized the autonomy of the Kurdistan Regional Government during the interim between "full sovereignty" and the adoption of a permanent constitution.

The Kurdistan Regional Government currently has constitutionally recognised authority over the provinces of Arbil, Dohuk, and Suleimaniya, as well as de facto authority over parts of and Ninawa and Kirkuk (at-Ta'mim) provinces.

One particularly difficult issue yet to be resolved is the future boundaries of the region. Many Kurds wish it to be expanded to include the largely Kurdish cities of and , but this is complicated by the Assyrian, Turkmen and populations of both cities and the opposition of , which is concerned about the region's potential to break away from Iraq (with possible consequences for its own Kurdish minority). The final boundaries of the autonomous region are set to be decided through a number of referendums which were scheduled to be held before the end of 2007 as stipulated in the Iraqi constitution. However, the preparations needed for such a referendum to take place have not been made by the Iraqi central government, and the promised referenda have been postponed for up to six months. Some Kurdish politicians have accused the government of intentionally delaying preparations. The president of the KRG, , has announced his opposition to a delay several times. [ [http://www.rferl.org/featuresarticle/2007/06/0b7c4568-f124-4224-98ba-f498102d52aa.html Iraq: Kurdish Official Says Kirkuk Normalization To Proceed - RADIO FREE EUROPE / RADIO LIBERTY ] ]

In the wake of the ratification of the Iraqi constitution in October 2005, Iraqi Kurdistan reconstituted itself as a federal region under the new constitutional framework. Kirkuk's status with respect to the federal region should, under that framework, be decided by a simple majority vote in the provinces.

The Kurdistan Regional Government has inaugurated a movement to distinguish itself from the rest of Iraq, entitled "Kurdistan - ", in a bid to attract investors by showing its security and economic progress amidst the . [ [http://www.theotheriraq.com/ Kurdistan - The Other Iraq ] ]

The region has recently established a sister-state relationship with the US State of . [ [http://www.leg.state.or.us/05orlaws/sessresmem.dir/scr0003ses.htm Senate Concurrent Resolution 3, Oregon Laws 2005] ]