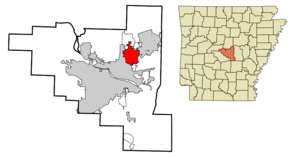 mapsize = 250px
map_caption = Location in Pulaski County and the state of

Sherwood is a city in Pulaski County, , , and a suburb of Little Rock. According to 2005 Census Bureau estimates, the population of the city was 23,149.

There were 8,798 households out of which 32.6% had children under the age of 18 living with them, 57.4% were married couples living together, 10.4% had a female householder with no husband present, and 29.4% were non-families. 24.6% of all households were made up of individuals and 6.4% had someone living alone who was 65 years of age or older. The average household size was 2.42 and the average family size was 2.90.

The City of Sherwood is an incorporated municipality (city of the first class) with a Mayor elected to a four-year term, and eight elected aldermen, a city clerk, and a part-time city attorney.

Mayor Virginia Hillman made history on August 1, 2007, as she was sworn in as Sherwood's first female mayor. Bill Harmon served as interim mayor April 12, 2007 to July 31, 2007, following the resignation of Mayor Danny Stedman. Harmon had not run for re-election after holding the office of mayor for 14 years through 2006.

Stedman, who was elected in November 2006, previously served as a Sherwood alderman for four years. Upon taking office in January 2007, Stedman was extremely excited about his plans for Sherwood and the city's future. In April 2007, Stedman cited health concerns for himself and his wife as he resigned from office.

Stedman had been one of three newly elected officials in the city in the 2006 election. Others include city clerk/treasurer Virginia R. Hillman, and council member Charlie Harmon (Alderman Ward 1, Position 2).

Five candidates ran for the office of Sherwood mayor after the resignation of former Mayor Danny Stedman: Richard Devine, Doris Anderson, Virginia Hillman, Bill Harmon, and Victor Sierra. No candidate received more than 50 percent of the votes; therefore, another special election was held between to two candidates receiving the most votes. This election was held on July 31, 2007 between Interim Mayor Bill Harmon and City Clerk Virginia Hillman.

Upon the Jacksonville ballot issue being announced, Sherwood Mayor Hillman and the Sherwood City Council ordered a special election for March 11, 2008, to gauge support for the annexation of Gravel Ridge into Sherwood. In each of the cities' respective elections, each city's residents as well as the residents of Gravel Ridge voted. The proposal for annexation into either Jacksonville or Sherwood passed in each election. The result prompted a third special election for Gravel Ridge residents only on April 1, 2008, to vote on whether they wanted to be annexed into Sherwood or Jacksonville, with voters ultimately deciding in favor of annexation by Sherwood.

Gravel Ridge was formally annexed during the Sherwood City Council meeting on April 28, 2008 [http://www.cityofsherwood.net/City/Meetings/Agendas/Agenda%20080428.pdf] , during which the territory comprising the one-time was divided along Arkansas Highway 107 into additions to the first and second wards of Sherwood.

The City of Sherwood is represented on the City Council by two alderman from four wards for a total of eight alderman. The first position is currently on four year terms with the second position going to four year terms beginning with the general election in 2008. This will offset the elections for the city council members and make four of the eight alderman positions up for election every 2 years.

There are currently eight announced candidates for the 2008 General Election for all of the five contested city positions:

The city is involved in a lawsuit over the proposed development of North Hills golf course and Country Club, in the southern end of the city adjoining North Little Rock. The court date is scheduled in April 2008. Mayor Virginia Hillman repeatedly stated during her campaign for mayor for the special election that her plans were to put the issue to a vote for the citizens. The issue was last discussed at the Sherwood city council meeting at 7:00 P.M. on Monday, September 24, 2007. A re-zoning sign was placed on the North Hills property the week before Christmas.

Sherwood is home to several public and private schools for elementary and secondary education. Students seeking higher education often attend nearby colleges and universities including the and .

The [http://www.abundantlifeschool.org/ Abundant Life School] is a co-educational private school for grades pre-kindergarten through twelfth grade and is a member of the Association of Christian Schools International (ACSI).

The includes the Amy Sanders Library in Sherwood.

The " [http://www.sherwoodvoice.com/ Sherwood Voice] " is a local serving the city and its nearby communities in Pulaski County with its print publication and website.

As a community newspaper, articles are centered around local news, issues, and events. Sports coverage is usually limited to the area's middle school and high school teams, such as the Sylvan Hills Bears and the Abundant Life School Owls.