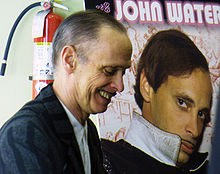 After an introductory sequence during which chickens are beheaded on a chopping block, the main action begins. Platinum blond bombshell Mary Vivian Pearce begins her day by riding the bus and reading Kenneth Anger's Hollywood Babylon.

Bombshell is later seduced by Danny Mills, a hippie degenerate "shrimper" (foot fetishist), who starts molesting her feet while she fantasizes about being Cinderella. She is then hit by a car driven by Divine, a portly blonde who was trying to pick up an attractive hitchhiker whom she imagines naked. Divine places her in the car and drives distractedly around Baltimore experiencing bizarre situations, such as repeated visits by the Mother Mary (Margie Skidmore) - during which Divine exclaims, "Oh Mary ... teach me to be Divine". Divine finally takes the unconscious Bombshell to Dr. Coathanger (David Lochary), who amputates her feet and replaces them with bird-like monster feet which she can tap together to transport herself around Baltimore.

Depending on versions of the story; either Waters or the whole crew (except Divine) was either arrested or nearly arrested during production for illegally shooting a scene involving a nude hitchhiker on the campus of Johns Hopkins University.

The film's title refers to a series of semi-related quasi-documentary films that were popular during the 1960s: Mondo Cane, Mondo Freudo, Mondo Bizarro, etc. The title also pays tribute to Mondo Topless, a film by one of Waters' favorite directors, Russ Meyer.

Waters, in a 2008 interview, stated that the songs used in the film were taken right out of his own record collection. Waters says he did not pay the proper licensing fees to use these songs because he could not afford to. It is because of this, Waters says, that Mondo Trasho remains unreleased, as the still unsecured music rights would be too prohibitively expensive to clear.

Waters himself has stated that he does not care for this movie, and claims it should have been a short-film instead of a feature.