Melaine
This article is about the Bishop of Rennes. For the legendary Bishop of Rouen, see Mellonius. 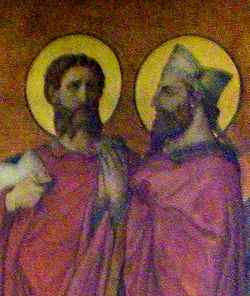 Melaine grew up at Plaz in Brain, near Redon. He was a pious child, often being punished for spending too long at his prayers. He became a monk and then abbot. He was nominated the successor to Saint Amand of Rennes as Bishop of Rennes. During his rule, Clovis took over the area and Melaine became his trusted advisor. He opposed immigration from Britain and attended the Council of Orléans in 511. He died at Plaz before 549 and was buried in the Abbey Church of Notre-Dame en Saint-Mélaine in Rennes.

Melaine quickly became revered as a saint, especially after the wooden tower above his grave burnt down and his tomb miraculously survived. He has three feast days: 6 November (death), 6 January (burial) and 11 October (translation). In Wales, his feast is celebrated on 10 rather than 11 October at St Mellons where a Saint 'Mellonius' is said to have been born. In Cornwall, he is the patron of St Mellion and Mullion, where there is a tradition of his visit.