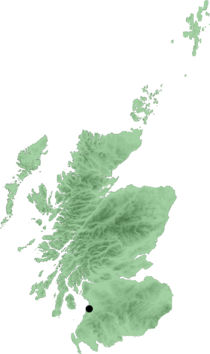 Maybole (Scottish Gaelic: Am Magh Baoghail, pronounced [ə maɣ pɯː.al]) is a burgh of barony and police burgh of South Ayrshire, Scotland. Pop. (2001) 4,552. It is situated 9 miles (14 km) south of Ayr and 50 miles (80 km) southwest of Glasgow by the Glasgow and South Western Railway.

The head of the old Maybole Cross in the gardens of Maybole Castle in 2005. The cross bears the coats of arms of the Kennedy family of Cassillis and has a rare Moon dial on another face out of view.

It is an ancient place, having received a charter from Donnchadh, Earl of Carrick in 1193. In 1516 it was made a burgh of regality, but for generations it remained under the subjection of the Kennedys, afterwards Earls of Cassillis and (later) Marquesses of Ailsa, the most powerful family in Ayrshire. The current Marquess of Ailsa lives at Cassillis House, just outside Maybole. The ancestral seat of the Marquesses of Ailsa is Culzean Castle, now run by The National Trust for Scotland and located just a few miles from Maybole. In former times, Maybole was the capital of the district of Carrick, and for long its characteristic feature was the family mansions of the barons of Carrick. Maybole Castle, a former seat of the Earls of Cassillis, still remains. The public buildings include the town-hall, the Ashgrove and the Lumsden fresh-air fortnightly homes, and the Maybole combination poorhouse.

The town is served by Maybole railway station. The leading manufactures are of boots and shoes and agricultural implements. Two miles to the south-west are the ruins of Crossraguel (from Crois Riaghail meaning 'Cross of St Regulus' ) Abbey, founded about 1240.

Kirkoswald, where Robert Burns spent his seventeenth year, learning land-surveying, lies a little farther west. In the parish churchyard lie the real reople who inspired two of Burn's fictitious characters Douglas Graham (Tam o' Shanter) and John Davidson (Souter Johnnie). Four miles to the west of Maybole on the coast is Culzean Castle, the chief seat of the marquess of Ailsa, dating from 1777; it stands on a basaltic cliff, beneath which are the Coves of Culzean, once the retreat of outlaws and a resort of the fairies. Farther south are the ruins of Turnberry Castle, where Robert the Bruce is said to have been born. A few miles to the north of Culzean are the ruins of Dunure Castle, an ancient stronghold of the Kennedys.

New housing on the site of the old St. Cuthbert's shoe factory.

Margaret McMurray (??-1760), one of the last native speakers of a Lowland dialect of Scottish Gaelic is recorded to have lived at Cultezron (not to be confused with nearby Culzean), a farm on the outskirts of Maybole.

The secondary school for Maybole is Carrick Academy.

The lyrics of The Waterboys' 'Glastonbury Song' include:

"I dreamed myself from the sultry plains

To the old green square back in old Maybole ..."