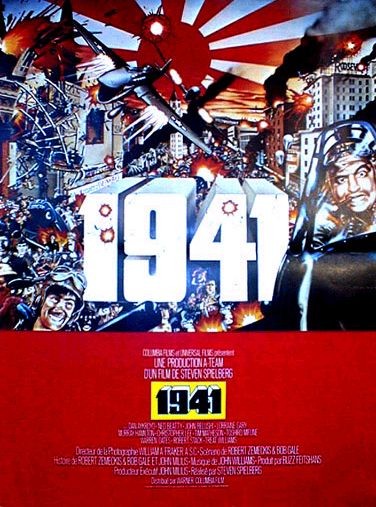 "1941" is 's fourth theatrical film, written by and . It starred and and premiered in December . The film is a comedy about a panic in the area that occurs after the . The plot is loosely based on the West Coast air raid, an incident that has come to be known as the Great Los Angeles Air Raid of 1942, and the , as well as the shelling of the Ellwood oil refinery, near Santa Barbara, by a Japanese submarine. In the film version, the Japanese submarine crew, led by Commander Mitamuru ( in a near-parody of other, more serious roles as Japanese officers in American films) are joined by a hard-line German naval captain (), and have crossed the Pacific Ocean to destroy something "honorable."

Although it was not as financially successful as Spielberg's previous (and later) films, it is widely recognized for its special-effects laden progressive action and camera sequences. [ Dolan 1985, p. 98-99. Quote: "The special effects are beautifully done."] [ Culhane, 1981, p. 127. Quote: "... there are no tell-tale lines around any element of the composite photography. This is blue-screen work at its best." (The Oscar-winning team of L. B. Abbott and A.D. Flowers were in charge of the special effects on "1941".)]

, who played the first victim in Spielberg's "Jaws", plays a character who goes for a midnight swim, alone and naked. But instead of a shark, a Japanese submarine surfaces under her. She holds on to the periscope as it rises. A Japanese crew member looks up at the naked girl clinging to the submarine, and yells: "Hollywood! Hollywood!" At this point, the submarine crew realizes they have arrived where they intended to be, Hollywood, and the vessel submerges once again while the girl swims to safety.

Just days after the attack on , in Los Angeles, Major General () attempts to bring order, but Colonel Mad Man Maddox (), the General's new secretary Donna Stratten (Nancy Allen) and the General's assistant Captain Loomis Birkhead () all have other ideas.

At the Douglas family home on the coast, Wally is confronted by Mr. Douglas () and his wife Joan (), still angry that he previously destroyed their car. Soon after, the tank crew arrive to deliver a large gun; Corporal Sitarski spots Betty.

The Japanese submarine becomes lost trying to find Los Angeles when the ship's compass is broken. A landing party captures a local timber merchant, Hollis Wood (); on board the sub, they see he has a small compass that he swallows. Wood escapes, while in Los Angeles, Major General Stilwell goes to see the feature film "". Captain Birkhead and Donna Stratten decide to go the local airfield where Colonel Madman Maddox has both aircraft and a belief the Japanese are about to attack.

At the USO dance, Sitarski and Betty are inside as Wally sneaks in with a stolen 's uniform, steals Betty away but ignites a massive brawl involving all the servicemen. Sgt Tree arrives in his tank just as Los Angeles goes to Red Alert with an unknown aircraft in the air. Ward Douglas spots the Japanese submarine lurking near his home. As Birkhead and Stratten fly over Los Angeles in the back of a purloined aircraft, civil defense batteries blast away. Chaos continues as Wild Bill joins the fight and crashes. Wally commanders Sgt Tree's tank, Wild Bill follows on motorbike, crashing through a paint factory and then a turpentine factory. Meanwhile Ward Douglas begins firing at the Japanese submarine, destroying his house in the process. The submarine returns fire (Mitamuru: "Fire at that industrial structure!"), hitting an amusement park which careens into the ocean. The tank sinks when the pier collapses as Wild Bill drives his motorbike into the ocean and swims to the submarine, where he is captured by the Japanese, who, believing their honorable mission accomplished, now return home. The German captain is thrown overboard by the Japanese and is later captured—the only U.S. "victory" of the movie.

The following morning, General Stilwell arrives at the Douglas home where Ward Douglas goes to hang a Christmas wreath, only to accidentally push his damaged home into the Pacific Ocean. The movie ends with all the characters in front of the foundations of the destroyed home.

The film, mainly a production of (with some help from ), [Universal Studios now owns the worldwide rights to the film, with the exception of television distribution, which is handled by .] was a moderate success, but not the blockbuster film the producers were hoping for. Because the film failed to match the box office numbers of Spielberg's previous films, "Jaws" and "", "1941" was considered a flop by comparison in regards to Spielberg's previous record on "Jaws".

It did not help that some mainstream publications pre-labeled it as "Spielberg's Christmas Turkey". The film was slammed for being excessive and ham-handed. "1941", along with 's "", 's "New York, New York", 's "Sorcerer", and 's "Popeye", 's "", became major examples of excessive directorial control over a film and marked the beginning of the end of the era which closed with the historic failure of 's "Heaven's Gate".Fact|date=March 2008 While "Apocalypse Now" achieved critical acclaim and reasonable box office success, the other films are regarded as each of the respective director's failures.

Spielberg humorously joked at one point that he considered converting "1941" into a musical halfway into production and mused that "in retrospect, that might have helped."

However, Bob Gale notes in a DVD documentary about the film: :It is down in the history books as a big flop, but it wasn't a flop. The movie didn't make the kind of money that Steven's other movies, Steven's most successful movies have made, obviously. But the movie was by no means a flop. And both Universal and Columbia have come out of it just fine.

The film was previewed at approximately two and a half hours, but and . who both had a major financial investment in the the film, felt the film was too long to be a . The initial theatrical release was edited down to just under two hours, against Spielberg's wishes. After the success of his 1980 "Special Edition" of "", Spielberg was given permission to create his own "extended cut" of "1941" to represent his original . This was done for network television (it was only shown on ABC one time, but it was seen years later on ). A similar extended version (with additional footage and a few subtle changes) was released on LaserDisc, VHS, and later on DVD.

It is notable as one of the few American films featuring , a popular Japanese actor.

Both and were offered the role of Major General Stilwell. Wayne phoned director Steven Spielberg, who had given him the script, and not only turned it down due to ill health but tried to get Spielberg to drop the project as he felt it unpatriotic.

According to Steven Spielberg's appearance in the documentary ": A Life in Pictures", Kubrick suggested that "1941" should have been marketed as a drama rather than a comedy.

When Captain Wild Bill Kelso slipped off the wing of his airplane after being lifted by two soldiers, it was a real accident; it was left in the movie as it fitted his eccentric character. The where Captain Wild Bill Kelso (John Belushi) landed to refuel was also used in Spielberg's "Duel". Lucille Benson, the filling station attendant, had a role in "Duel" as the owner of the Snakerama roadside attraction.

It took so long to set up the final sequence of shots in which the house falls into the sea that cast and crew members started a betting pool on the day and time the shot would begin filming. Dan Aykroyd won the bet.

Co-writer Bob Gale stated that many of the events in the movie were based on real incidents, including the , the Ellwood Shelling, the and an incident where the army really did put an anti-aircraft gun in the yard of a homeowner on the coast (in Maine),

Some of the scenes made so much noise during filming that the crew could not hear director Steven Spielberg yell "cut". For those scenes he had to fire a prop machine gun in the air to get the action to stop. Dan Aykroyd's tank is an medium tank.

The "" starship USS "Bozeman" takes its hull number of NCC-1941 from the film, as modelmaker Greg Jein worked on both productions.

During the USO riot scene, when the naked MP is tossed into the window of the restaurant from the fire truck, John Belushi plays the patron eating spaghetti. He is in makeup to look like in "", which he famously parodied on the sketch comedy TV series "". Belushi told Spielberg he wanted to appear in another part of the movie and the idea struck Spielberg as very humorous.

A deleted scene had Slim Pickens' character threatened with what looks like a torture device but turns out to be a coat hanger. Steven Spielberg hated losing the joke and swore he would try to put it in every one of his future movies until it stayed there. It happened in his very next film, "".

Another deleted scene showed John Belushi's Wild Bill crossing paths with Aykroyd's Frank Tree as Bill heads for the Japanese sub just as Tree emerges from the water submerged tank. The two look at each other as if they recognize one another, a reference to their friendship and partnership from "". It was the only scene where they interacted.

In the opening scenes, in which a Japanese submarine surfaces off the coast of California, can clearly be seen. Haystack Rock is a prominent landmark off the coast.

The musical score for "1941" was conducted and composed by . The march song from "1941" is perhaps most memorable, repeated throughout the movie and is Spielberg's favorite Williams march (for Speilberg's next film, Williams wrote the ). The score included a mixture of '40s popular music such as the . Music from the score (tracks listed as they appear on the soundtrack LP and CD) was based on characters and scenes from the movie:
#The March From "1941"
#The Invasion
#The Sentries
#Riot At The U.S.O.
#To Hollywood And Glory
#Swing, Swing, Swing
#The Battle Of Hollywood
#The Ferris Wheel Sequence
#Finale of 1941

The LaserDisc and DVD of the film has an isolated music-only track, which includes additional cues not heard on the soundtrack album.

The film received three nominations in the 1980 , but it did not win any awards.