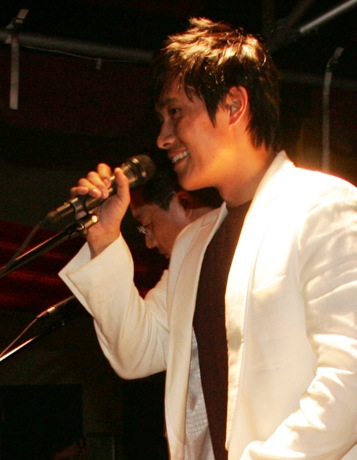 Lee made his debut in 1991, starring in the television drama "Asphalt My Hometown". Lee's later movie, "Joint Security Area", was a smash hit, surpassing the box office benchmark set by "Shiri".

After Lee's role in "", his acting talent gathered widespread recognition.

Lee has recently played a part in the movie "" with , and , a movie about three sisters who fall in love with Lee Soo-hyon. Soo-hyon falls in love with one of the sisters, leaving the other two heartbroken. The movie has reached a very high bid of US$5.5 million in ." ", released in 2005, was well received by critics.

In 2005, Lee released his biographies "Limited", "Brave" and "Human" during his visit to , a 3- collection in which he talked about his life and acting career.

His likeness was used for the main character in the video game "" which was released on , .

Lee is fluent in English and able to speak French and Mandarin, in addition to his native Korean. He also has a Westernised name, Brian. [ [http://www.leebyunghun.com.hk/pmain_eng.htm Profile] ; [http://www.byunghunlee.org/happymoments/021103-01.htm BH Meets Singapore Fans in Seoul] ]

He was also once romantically linked to actress (Song Hae Gyo) who was the lead actress in the drama .