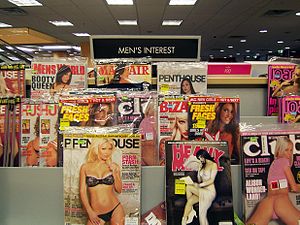 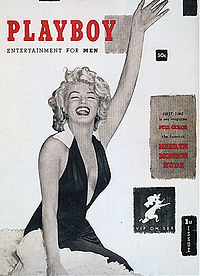 The first issue of Playboy, published in December of 1953.

In 1880, halftone printing was used to reproduce photographs inexpensively for the first time.[4] The invention of halftone printing took pornography and erotica in new directions at the beginning of the 20th century. The new printing processes allowed photographic images to be reproduced easily in black and white, whereas printers were previously limited to engravings, woodcuts and line cuts for illustrations.[5] This was the first format that allowed pornography to become a mass market phenomena, it now being more affordable and more easily acquired than any previous form.[3]

First appearing in France, the new magazines featured nude (often, burlesque actresses were hired as models) and semi-nude photographs on the cover and throughout; while these would now be termed softcore, they were quite shocking for the time. The publications soon either masqueraded as "art magazines" or publications celebrating the new cult of naturism, with titles such as Photo Bits, Body in Art, Figure Photography, Nude Living and Modern Art for Men.[3] The British magazine Health & Efficiency (now H&E naturist, often known simply as "H&E") was first published in 1900, and began to include articles about naturism in the late 1920s.[6] Gradually, this material came to dominate - particularly as other magazines were taken over and absorbed. At times in its post-WWII history, H&E has catered primarily to the soft-porn market.

Another early form of pornography were comic books known as Tijuana bibles that began appearing in the U.S. in the 1920s and lasted until the publishing of glossy colour men's magazines commenced. These were crude hand drawn scenes often using popular characters from cartoons and culture.[7]

In the 1940s, the word "pinup" was coined to describe pictures torn from men's magazines and calendars and "pinned up" on the wall by U.S. soldiers in World War II. While the '40s images focused mostly on legs, by the '50s, the emphasis shifted to breasts. Betty Grable and Marilyn Monroe were two of the most popular pinup models. In the second half of the 20th century, pornography evolved into the men's magazines such as Playboy and Modern Man of the 1950s. The decade saw the rise of the first mass-market pornographic magazines.[8] In fact, the beginning of the modern men's glossy magazine (or girlie magazine) can be traced to the 1953 purchase by Hugh Hefner of a photograph of Marilyn Monroe to use as the centerfold of his new magazine Playboy. Soon, this type of magazine was the primary medium in which pornography was consumed.[9]

By the 1970s magazines started to focus on the pubic area. Paul Raymond pioneered the UK adult magazine market when he launched Men Only in 1971, then Club International in 1972,[10] and his company Paul Raymond Publications still dominates the British market today.[11] Some researchers have detected increasingly violent images in magazines like Playboy and Penthouse over the course of the 70s, with them then returning to their more upscale style by the end of the decade.[12] Sales of pornographic magazines in the U.S. have declined significantly since 1979,[13] with a nearly 50% reduction in circulation between 1980 and 1989.[14] The fact that the U.S. incidence of rape has increased over the same period has cast doubt on any correlation between magazine sales and sex crimes.[15] Studies from the mid 80s to the early 90s nearly all confirmed that pornographic magazines contained significantly less violent imagery than pornographic films.[12]

In the 1990s magazines began to feature harder material such as sexual penetration, lesbianism and homosexuality, group sex, masturbation, and fetishes in the more hard-core magazines such as Hustler.[1][3][9] In the late 90s and 2000s the market for pornographic magazines declined, as they were challenged by new "Lad mags" such as FHM and Loaded, which featured softcore photos.[1] The availability of pornographic DVDs and above all internet pornography also caused a decline in sales.[1][11] Many magazines now have their own websites which also show pornographic films.[1] Despite falling sales, the top-selling U.S. adult magazines still maintain high circulations compared to most mainstream magazines, and are amongst the top-selling magazines of any type.[14]

Several magazines feature photos of "ordinary" women submitted by readers, for example the Readers Wives sections of several British magazines, and Beaver Hunt.[1] Many magazines also feature supposed stories of their reader's sexual exploits, many of which are actually written by the magazines writers.[1] Many magazines contain a high number of advertisements for Phone sex lines, which provide them with an important source of revenue.[1]

A successful magazine requires significant investment in production facilities and distribution networks.[8] They require large printing presses and numerous specialized employees, such as graphic designers and typesetters.[8] Today a new magazine start-up can cost as much as $20 million, and magazines are significantly more expensive to produce than pornographic films, and even more expensive compared to internet pornography.[8]

They are dependent on advertising revenue, which may force a magazine to tone down its content.[8]

Pornographic magazines are often sold in convenience stores, newsagents and petrol stations.[1] Some larger retail chains refuse to stock them.