Donald M. Eigler is a physicist and IBM Fellow at the IBM Almaden Research Center. On September 28, 1989 he achieved a landmark in humankind’s ability to build small structures by demonstrating the ability to manipulate individual atoms with atomic-scale precision. He went on to write I-B-M using 35 individual xenon atoms; this event was likened to the Wright brothers’ first flight at Kitty Hawk by Jack Uldrich in his book, The Next Big Thing is Really Small: How Nanotechnology Will Change The Future of Your Business. Eigler's feat was performed using a low temperature ultra high vacuum scanning tunneling microscope that he designed and built. For this and other work Donald Eigler was awarded, together with Nadrian Seeman, the Kavli Prize for Nanoscience in 2010.

Since then, his group’s results include the invention of quantum corrals, discovery of the quantum mirage effect, demonstration of a fundamentally new way to transport information through a solid utilizing modulated quantum states, the demonstration of nanometer-scale logic circuits based on molecular cascades, and invention of spin excitation spectroscopy. Most recently, milestones made by the researchers in Eigler's historic lab include the ability to measure the magnetic properties of individual atoms and the ability to measure the force it takes to move individual atoms.

Eigler received both his bachelor's and doctorate degrees from the University of California San Diego and was named its Outstanding Alumnus of the year in 1999. He has been recognized for his accomplishments with the Davisson-Germer Prize awarded by the American Physical Society, the Dannie Heineman Prize awarded by the Göttingen Academy of Sciences, the Newcomb-Cleveland Prize awarded by the American Association for the Advancement of Science, the Grand Award for Science and Technology awarded by Popular Science Magazine, and numerous honorary lectureships including the Gordon Research Conference's Alexander M. Cruikshank Lectureship in Physical Sciences, the Bethe Lectureship at Cornell University, the Loeb Lectureship at Harvard University, the Bragg Lectureship at University College London and a Regents Lectureship at the University of California Los Angeles. In 2002 he received an honorary doctorate from the Technical University of Delft. He is a fellow of the American Physical Society and the American Association for the Advancement of Science. In 2004 he was elected a member of the Max Planck Society, Germany’s most prestigious scientific organization. In 2007 he was appointed a Distinguished Visiting Fellow at the Harvard University School of Engineering and Applied Sciences. He was named an IBM Fellow in 1993, the highest technical honor in the IBM Corporation.

In addition to his professional pursuits, Eigler has been building his skills as a trainer of service dogs, specializing in dogs that assist the mobility impaired. The IBM Corporation has allowed him to utilize the Almaden Research Center as a real-world training ground for his dogs. His dogs-in-training are a regular sight at Almaden; because one or both of them is nearly always with him, they have been included in New York Times and San Francisco Chronicle feature stories on IBM Research.

During a lecture at Cornell University in 2005, he operated a scanning tunneling microscope over the internet. 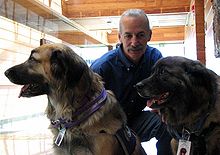 In the summer of 1984, as a postdoc at Bell Labs working in Gene Golovchenko’s group, Don Eigler set out to build and operate an ultra-high-vacuum low-temperature Scanning Tunneling Microscope (UHV-LT-STM). At that time, groups around the world were struggling with room temperature STMs. Only Gerd Binnig had achieved atomic resolution.

Eigler was certain about the potential for scientific discovery that a low temperature STM would possess and was particularly interested in doing site-specific vibrational spectroscopy of adsorbates (accomplished 14 years later in 1998 by Wilson Ho’s group). By late 1985, he had successfully demonstrated atomic resolution images of Si (111) at 4K and had glimpsed some of the potential of a low temperature STM. While this work did not lead to a publication, it established his position in the scanned probe community and demonstrated the power of LT-STMs. In Eigler’s view, this remains one of his most important scientific contributions.

In 1989, three years after joining IBM’s Almaden Research Center, Eigler and colleague Erhard Schweitzer demonstrated the ability to position individual atoms with atomic precision using a low-temperature STM. This accomplishment, published in Nature, resulted in worldwide recognition by the media. A recent book on nanotechnology (“The Next Big Thing is Really Small” by Jack Uldrich) identifies this accomplishment as the birthing of nanotechnology and likens it to the first powered flight by the Wright brothers. This work remains his most important and most widely known accomplishment. Its importance is two-fold: 1) It marks a milestone in the ability to structure the world around us, and 2) by allowing the construction of atomically-precise structures, atom manipulation greatly broadens the scope of experimentation with the STM.

Shortly after discovering how to manipulate atoms with the sliding process, Eigler, along with colleagues Chris Lutz and William Rudge discovered a new method for manipulating atoms in which a voltage pulse applied to the tip of the STM results in the transfer of an adsorbed atom from the sample surface to the tip of the STM. The atom may then be carried to a new location and deposited on the surface by a reverse polarity voltage pulse. They then demonstrated an atomic-scale two-terminal switch by showing that the reversible transfer of the atom between the tip and surface resulted in a reversible change in conductance of the tunnel junction. This is the smallest switch built to date. This work was published in Nature and received substantial press coverage.

In 1993, Mike Crommie, Lutz and Eigler published a paper in Nature that reported the observation of standing waves in the 2D electron gas formed from the surface-state electrons of the Cu (111) surface. This provided a quantitative tool for learning how these electrons were interacting with their environment and provided compelling images of the wave properties of electrons. It stimulated research by several other groups into the lifetime of surface-state electrons, the scattering of surface state electrons at point defects and step edges, and served as a springboard for Eigler and team’s subsequent research into Quantum Corrals, Quantum Mirages and Molecule Cascades.

In 1993, Crommie, Lutz and Eigler published a paper in Science in which they showed quantum confinement of Cu (111) surface-state electrons to so-called “Quantum Corrals:” structures built from adatoms using atomic manipulation processes. Aside from showing that they could quantitatively account for the energies and density distribution of the quantum states in the interior of the corral, this opened the door to a new kind of engineering: the engineering of the spatial and energetic distribution of quantum states on the surface of a metal. This work received widespread attention in the media and resulted in images which have achieved icon status. This work also played a pivotal role in their discovery of the “Quantum Mirage” effect.

The Local Effect of a Magnetic Impurity on a Superconductor:

In 1997, Ali Yazdani, Barbara Jones, Lutz, Crommie and Eigler published a paper in Science in which they demonstrated the ability to map out the spatial dependence of the mid-gap state surrounding a magnetic impurity on the surface of a superconductor. This work showed a surprisingly local state which Barbara demonstrated could be analytically accounted for. It demonstrated that the meat of the superconductor’s response to the magnetic impurity occurred on a length-scale that is short compared to the coherence length. This was the first experiment to show the utility of the STM in investigating the local response of a superconductor to a point-defect. This line of investigation was later taken up by Seamus Davis and brilliantly applied to the investigation of High Tc superconductivity.

In 2000, Hari Manoharan, Lutz and Eigler published a paper in Nature in which they demonstrated that the Kondo resonance signature of a magnetic adatom located at one focus of an elliptically shaped quantum corral could be projected to, and made large at the other focus of the corral. While resulting in widespread publicity and stimulating some discussion about whether any magnetization was projected, the real importance of the mirage effect came from understanding it as due to the local modulation of eigenmodes of a resonator. This led to a very fundamental patent for information transport via modulated quantum states (U.S. Patent 6,441,358) and the subsequent demonstration of multi-channel information transport through the same volume of space using quantum states specifically engineered to achieve this goal which was published in the Philosophical Transactions of the Royal Society.

In 2002, Andreas Heinrich, Lutz, Jay Gupta and Eigler published a paper in Science in which they demonstrated the ability to fabricate and operate novel logic circuits made from carbon monoxide molecules assembled into meta-stable arrays on a Cu (111) surface. They demonstrated all of the logic elements and circuits required to perform the one-time calculation of an arbitrary logic function. Aside from its novelty and demonstration that the motion of the CO molecules was due to tunneling, the significance in the accomplishment can be thought of as three-fold: 1) these were the first computational structures in which all of the components necessary for computation were at the nanometer length scale, 2) it pointed Eigler and his colleagues in the direction of magnetic-cascade based computation, and 3) it served to underscore the importance of investigating alternative modes of computation in nanometer-scale structures.

In 2004, Heinrich, Lutz, Gupta and Eigler published a paper in Science in which they demonstrated the ability to measure the energy required to flip the spin of a single atom, the so-called “Zeeman Energy,” through inelastic electron tunneling spectroscopy. Achieving this goal required the design, construction and debugging of a one-of-a-kind UHV STM that operates at temperatures as low as 0.5 kelvin and in magnetic fields as high as 7 teslas. This was necessary in order to achieve the spectroscopic resolution required to measure a spin flip. The importance of this work is that it provides a non-perturbative atomic-resolution means to measure a fundamental magnetic property. Combined with the STM’s imaging, spectroscopic and atom manipulation modes, we now have a way to build and interrogate the magnetic properties of novel nanometer-scale structures. Eigler anticipates that this capability will play a pivotal role in helping to achieve the next goal – Spin Cascade Computation.

13. “Atom Manipulation With the Scanning Tunneling Microscope,” D.M. Eigler, accepted for publication in the Proceedings of the NATO Advanced Studies Institutes: Atomic and Nanoscale Modification of Materials, Kluwer Academic Publisher.

14. “What is Underneath? Moving Atoms and Molecules to Find Out,” P.S. Weiss and D.M. Eigler, Proceedings of the NATO Advanced Studies Institutes: Manipulation of Atoms Under High Fields and Temperatures—Applications, Kluwer Academic Publisher.