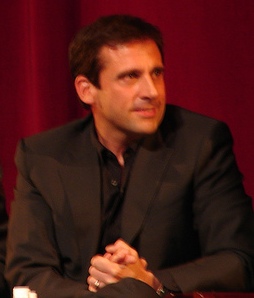 He has been celebrated as America's funniest man on the cover of . He received the 2006 for Best Actor in Television Comedy for the leading role of Michael Scott in American adaptation of Britain's comedy "The Office".

Carell, the youngest of four sons, was born and raised in Acton, to Harriet T. (née Koch), a psychiatric nurse, and Edwin A. Carell, an electrical engineer.

Carell is married to "" alumna , whom he met when she was a student in an improv class he was teaching at . [Interview: Steve Carell (, ). "", .] They have two children, Elisabeth Anne (born , ) and John (born June 2004). Walls appeared with him on "The Office" as his realtor and short-lived girlfriend, Carol Stills. Like her husband, Walls had been a "Daily Show" correspondent.

Carell is a skilled , which was used in a Season Two episode of "The Office", then later referenced by Jan in a Season 4 episode. Carell is also an avid hockey fan, and even played the position of goaltender as a child. He still plays in a men's league in Los Angeles, where he lives with his family.

Carell is a lifelong Catholic.

Prior to opting for a career as a performer, Carell worked as a in Littleton. He later recounted that he quit after a few months because he was "very, very bad at it." [Interview: Steve Carell (, ). "InFANity: The Office", Channel.] He also planned on attending law school, but was unable to write an explanation on an application form as to why he wanted to be a . Carell performed with troupe in 1991, where was his for a time. That same year, he landed his first film work in a minor role as Tesio in "".

In 1996, he was a cast member of the briefly aired "". Along with fellow cast member , Carell provided the voice of Gary, half of "", the -produced animated short which was moved to "" in 1997. He played a supporting character on many shows including "Come to Papa" and the short-lived 1997 sitcom "Over the Top". He has made numerous notable guest appearances, including on an episode of "" entitled "Funny Girl."

In 1999, he became a correspondent on "", appearing in recurring sketches like "Even Stephven " (opposite ) and "Produce Pete with Steve Carell." He remained a regular on the show until 2004.

Carell returned to "" on , , for a humorous piece on the second anniversary of the invasion of Iraq.

While there, he also recorded two guest appearances as "Produce Pete" which aired on , , and , (and was credited as a contributor).

He returned to the show as the guest on , , declaring that he was officially no longer with the show, ending speculation that he might return as a regular player.

Carell did his second guest appearance on , to promote "".

Carell appeared once again, a year later on , , as a guest on the show to promote his newest movie, "Get Smart". He joked about wanting to buy the show since he was now "very, very rich."

In 2005, Carell signed a deal with to star in an American reimagination of the TV show "The Office", a about life at a mid-sized paper supply company. Steve Carell plays Michael Scott, the idiosyncratic regional manager of Dunder Mifflin Scranton. The show has become enormously popular, with Carell receiving praise for his comedic performance, as well as a Golden Globe award and multiple nominations.

Two supporting roles in films helped get the attention of audiences: "", in which Carell plays Evan Baxter (an arrogant rival to 's character), who gets a humorous comeuppance while co-anchoring the news. In "", Carell plays another news personality, as slow-witted weatherman Brick Tamland.In spring of 2005, Carell began playing the lead role of Michael Scott on 's adaptation of a British programme "The Office". Although the first season of the adaptation was notable for its mediocre ratings, renewed it for another season due to the anticipated success of Carell's movie "",

Carell earned approximately $175,000 per episode of the third season of "The Office", twice his salary for the previous two seasons. Carell is also allowed "flex time" during filming to work on theatrical films. Carell worked on "" during a production hiatus during the second season of the "The Office".

Carell appeared as "Uncle Arthur" alongside and in the 2005 remake of "Bewitched". He also voiced a starring role in the 2006 computer-animated film "Over the Hedge" as Hammy the Squirrel. He also voiced in the 2008 animated film "Horton Hears a Who!" as the mayor of Whoville, Ned McDodd. He starred in "" in 2006, as Uncle Frank. His work in the films "," "", and "Bewitched" established Carell as a member of Hollywood's group. This set of actors, headlined by , , , , and , has become a profitable force in modern comedy. Carell acknowledged his membership in the group in his monologue when hosting the first episode of ""'s 31st season on , . Carell also mentioned that he auditioned to be a castmember on "" for the 1995-1996 season (season 21), but lost to .

Carell appeared as the title character of "", a sequel to "Bruce Almighty", reprising his role as Evan Baxter, now a U.S. Congressman. Although, ostensibly, God tasks Baxter with building an ark, Baxter also learns that life can generate positive returns with people offering Acts of Random Kindness. In October 2006, Carell began shooting the film "", co-starring and . Filming wrapped , , and the film was released on , .

Production closed down in the middle of the fourth season of "The Office" because of Carell's and others' refusal to cross the picket line of the , although it has begun again.

Carell is going to begin shooting a movie in late 2008 with opposite Tina Fey, with a release sometime in 2009, entitled Date Night.

Won:
*2006: Best Performance by an Actor in a TV series Musical or Comedy (for his role as Michael Scott in "The Office")

Won:
*2006: Outstanding Individual Achievement in Comedy (for his role as Michael Scott in "The Office")

Nominated:
*2007: Outstanding Performance by a Male Actor in a Comedy Series

*"The Office" (Season 3) - $175,000 an episode (renegotiated in 2006). [ [http://www.backstage.com/bso/news_reviews/multimedia/article_display.jsp?vnu_content_id=1002650508 Steve Carell Gets Richer Deal for 'The Office'] Andreeva, Nellie; , ; [http://www.backstage.com/bso/index.jsp Backstage.com: The Actor's Resource] ] In an "" interview, he commented on his salary, saying "You don't want people to think you're a pampered jerk. Salaries can be ridiculous. On the other hand, a lot of people are making a lot of money off of these shows."