Christmas village
For the seasonal attraction near Reading, Pennsylvania, see Koziar's Christmas Village.
Not to be confused with Christmas market. 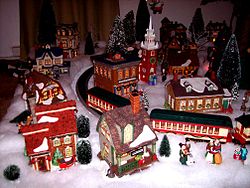 A Christmas village (or putz) is a decorative, miniature-scale village often set up during the Christmas season. These villages are rooted in the elaborate Christmas traditions of the Pennsylvania Dutch. Mass-produced cardboard Christmas villages became popular in the United States during the early and mid-20th century, while porcelain versions (especially those created by the company Department 56) became popular in the later part of the century.

The tradition of decorative Christmas villages is rooted in the holiday traditions of the Pennsylvania Dutch. In early-colonial American Moravian homes, the construction of a nativity scene, or putz, at the base of a Christmas tree was a very common holiday activity. The term was derived from the German verb putzen, which means "to clean" or "to decorate." These nativity scenes soon became very elaborate, and often included sawdust or fine dirt spread to represent roads leading to the manger; stones and fresh moss to represent grottos or caves; and sticks and branches to represent miniature trees. These details were in addition to the carved wooden figures that represented the Holy Family, animals, shepherds, and other traditional nativity figures.

A Christmas village set atop a table

Although initially placed beneath the Christmas tree, by the early 19th century a family's "putz" might have also been found on the fireplace mantel, side tables, and other prominent places within the home. These expanded scenes might include other stories from the Bible. The story of Noah's Ark, an especially popular subject for a putz, could result in the arranging of several hundred carved animals wending their way towards the ark.

By the mid-19th century, more secular figures and scene elements were being added to the putz. In many homes, the putz took more time and energy than the decoration of the family Christmas tree. Separate areas were developed with different themes; spreading outward from the Nativity scene were other farms or village scenes, which had a way of growing larger and more elaborate every year. Eventually, toy trains were added to these miniature worlds. 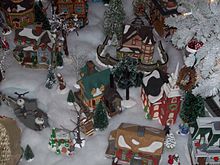 After World War II, several Japanese companies started mass-producing cardboard or paper houses, churches, and other buildings. These small buildings usually had holes in the back or the bottom through which Christmas lights were placed to provide illumination. The buildings had tiny colored cellophane windows and were decorated with mica-dusted roofs to give the appearance of snow. Since these buildings were made of inexpensive material and were widely available throughout the United States, they became a very popular Christmas decoration.

In the 1970s, ceramic or porcelain Christmas villages were introduced and started to gain popularity. Department 56 was one of the first companies to make these buildings and remains the most well-known. Other companies, such as Lemax, have also produced similar villages, and there are numerous other brands sold. Drugstores and dollar stores now often carry much smaller buildings, which are typically not as well-painted. Unpainted buildings are also sometimes available at craft stores.

Like many other Christmas traditions, the notion of a village to celebrate a holiday has spread to other holidays, with a few companies making Halloween and Easter villages.