The Aérospatiale SA 321 Super Frelon is a three-engined heavy transport helicopter produced by Aérospatiale of France. The helicopter is still in use in China where the locally produced version is known as the Z-8. "Frelon" is French for hornet.

The SA-3210 Super Frelon was developed by Sud-Aviation from the original SE-3200 Frelon. Sikorsky was contracted to supply the design of a new six-bladed rotor and five-bladed tail rotor. Fiat supplied a design for a new main transmission. The first flight of the Super Frelon was December 7, 1962. A modified prototype Super Frelon helicopter was used on July 23, 1963 to break the FAI absolute helicopter world speed record with a speed of 217.7 mph.[1]

Both civilian and military versions of the Super Frelon were built, with the military variants being the most numerous by far, entering service with the French military as well as being exported to Israel, South Africa, Libya, China and Iraq.

The transport version is able to carry 38 equipped troops, or alternatively 15 stretchers for casualty evacuation tasks.

The Naval anti-submarine and anti-ship variants are usually equipped with a navigation and search radar (ORB-42), and a 50 metre rescue cable. They are most often fitted with a 20 mm cannon, counter-measures, night vision, a laser designator and a Personal Locator System. It can also be refueled in flight. 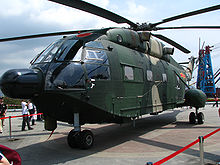 China acquired 13 Super Frelon SA321 naval helicopters in 1977-78. These helicopters came in two variants: anti-submarine warfare (ASW) and search and rescue (SAR) variant. The Super Frelon was the first helicopter of the PLA to be capable of operating from the flight deck of surface vessels. China also produces the Super Frelon locally under the designation Z-8 (land or ship based ASW/SAR helicopter). The Super Frelon remains operational with the PLA Navy today.

Since the early 1980s, the Super Frelons have been frequently used by the PLAN for shipborne ASW and SAR operations. For ASW mission, Z-8 is equipped with a surface search radar, French HS-12 dipping sonar while carrying a Whitehead A244S torpedo under the starboard side of the fuselage. They were also used to ferry supplies from replenishment ship to surface combatants, and transport marine troops from the landing ship to the shore. A naval SAR version called Z-8S with upgraded avionics and a searchlight, FLIR turret and a hoist flew on December 2004. Another rescue variant with dedicated medivac equipment onboard was also developed for the Navy as Z-8JH.

Z-8A version was developed as an army transport version and certified in February 1999. Two Z-8As were delivered to the Army for evaluation in 2001 but the Army decided to purchase more Mi-17V5s. Only one batch of about 6 Z-8A were delivered to the Army in November 2002, with the nose weather radar and side floats retained. Starting in 2007 PLAAF also acquired dozens of upgraded Z-8Ks and Z-8KAs for SAR missions, equipped with an FLIR turret and a searchlight underneath the cabin plus a hoist and a flare dispenser.

In 2003, the surviving Aeronavale Super Frelons are assigned to transport duties including commando transport, VertRep and SAR.

The SA321G Super Frelon served with Flottile 32F of the French Aviation navale, operating from Lanvéoc-Poulmic in Brittany in the Search and rescue role. They were retired on 30 April 2010, replaced by two Eurocopter EC225 helicopters purchased as stop gaps until the NHI NH90 comes into service in 2011-12.[3][4]

Designated SA321H, a total of 16 Super Frelon were delivered from 1977 to the Iraqi air force with radar and Exocets. These aircraft were used in the Iran-Iraq conflict and the 1991 Gulf War, in which at least one example was destroyed.

Israel ordered 12 helicopters in 1965 to provide the Israeli Air Force with a heavy lift transport capability. The first helicopter arrived on April 20, 1966, to inaugurate 114 Squadron operating out of Tel Nof. Four helicopters had arrived by start of the 1967 Six Day War, during which they flew 41 sorties. The helicopters saw extensive service during the War of Attrition, participating in such operations as Helem, Tarnegol 5 and Rhodes. [5]

The type was once again in service during the Yom Kippur War, following which Israel replaced the type's original Turbomeca Turmo engines with the 1,870shp General Electric T58-GE-T5D engines. The Super Frelons also took part the Israeli invasion of Lebanon in June 1982[5] and were finally retired in 1991.

The SAAF ordered 16 Super Frelon helicopters. South African Air Force used them in counter insurgency fighting and in Angola. In 1990 the Super Frelons were withdrawn from service, and replaced by the Puma and later Oryx helicopters.

Syria is believed to have purchased 21 Super Frelon helicopters, although it seems Syria never operated them. These helicopters may have been diverted to Iraq or Libya.

A Super Frelon helicopter of the 32F wing, landing on the Ouragan 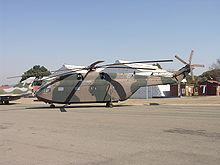 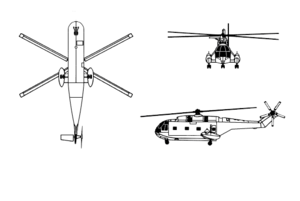