The Mexican Air Force (Fuerza Aérea Mexicana or FAM) is the aviation branch of the Mexican Army and depends on the National Defense Secretariat (SEDENA). Since 2008, its commander is Gen. Leonardo Gonzáles García.[2] 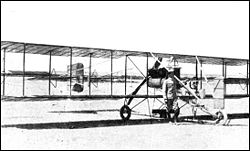 The Curtiss aircraft Sonora was used for observation and bombing. Mexico, 1913.

In 1925, due to the shortage of airplanes caused by World War I, Mexico set up the National Aviation Workshops (TNCA) to design and build its own airplanes and aeroengines. When U.S. Colonel Ralph O'Neill was hired to revamp the Mexican Air Force in 1920, he reported to General Plutarco Elías Calles that most of the aircraft available had to be replaced since they were obsolete and worn away. Therefore, Mexico acquired some British Avro 504K and Avro 504J airplanes, which later would be made in Mexico with the name Avro Anáhuac. In addition, in May 1920, Mexico acquired thirteen twin-engine bombers Farman F.50.[4] 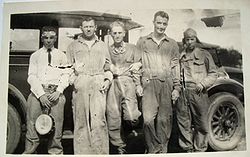 Between the years 1923 and 1929, Mexico found itself immersed in a wave of violent territorial, religious and military armed rebellions, which required the Air Force to quickly deploy its forces and provide air support wherever the federal army requested them. Some of these conflicts, that were decided mostly by the assertive use of the Air Force, are mentioned below.

On December 7, 1923, former President Adolfo de la Huerta launched a military coup (delahuertista rebellion) against the government of President Álvaro Obregón. The situation was extremely critical, because along with de la Huerta, about 60% of the army revolted, including various high-ranking generals across the country. The power tilted back in favor of the federal forces when the United States agreed to furnish the Mexican government with a fleet of new de Havilland DH-4B aircraft equipped with the Liberty motor, armed with Lewis and Vickers machine guns and able to carry bombs. The military coup was then suffocated by February 1924. 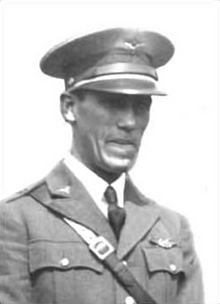 A territorial war was that of the Sonora Yaqui Indians who demanded by force that previous territorial treaties were implemented. The conflict lasted from 1926 to 1927, and it came to an end when a new treaty was implemented.

When President Plutarco Elías Calles pushed for the creation of the ‘Mexican Apostolic Catholic Church’, independent of Rome, it unleashed a widespread religious war known as the Cristero War. This long civil war lasted from 1926 to 1929.

In May 1927, while General Obregón seemed keen to impose the presidency to General Calles, General Arnulfo R. Gómez launched a military coup against both Obregón and Calles. His command posts were located in the cities of Puebla and Veracruz, where he led approximately 200 federal deserters, ammunition and weapons. The air force played a key role in their defeat.

Then, on March 3, 1929, a serious military coup took place, led by General José Gonzalo Escobar and heeded by various other generals. In these days, the air force's remaining airplanes consisted of worn and shot Bristol F.2 Fighter, Bristol Boarhound, de Havilland DH-4B and Douglas O-2C, a force that was not suitable to defeat Escobar's power.[5][6] In this context, the Mexican government convinced the U.S. government to promote the peace south of its border and quickly make available twelve new OU-2M Corsair with the 400 hp Wasp engine, nine Douglas O-2M, four Stearman C3B and six Waco Taper Wings. Only two weeks after making the request, the U.S. government agreed, and several Mexican pilots travelled to Brownsville, Texas, and New York to pick up the new aircraft. The key victory was decided in late March 1929 at the Battle of Jiménez, Chihuahua, where after several days of air raids, Escobar was defeated by General Calles, taking about 6000 prisoners.[7] This rebellion was quite serious, since a third of the officials and nearly 30,000 soldiers rebelled; in two months, more than 2000 men had been killed.

In May 1938, the Governor of San Luis Potosí, General Saturnino Cedillo, declared himself in rebellion and President Lázaro Cárdenas travelled there to personally mount the campaign against the revolt. The Air Force organized a mixed fleet of 17 aircraft that included some new V-99M Corsair, engaging the enemy assertively when spotted. Cedillo quickly realized he had no chance in open fields against the air force and ran to the Huasteca Hills, where his men dispersed, abandoning him.[8]

With the imminent collapse of the Spanish Republic in 1939, the Mexican government took delivery of military aircraft destined for the Republic, strengthening its arsenal. 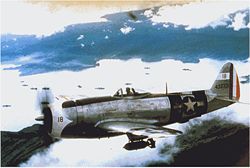 Mexican P-47D Thunderbolt over the Philippines.

The Escuadrón 201, a P-47D fighter squadron of the Fuerza Aérea Expedicionaria Mexicana (Mexican Expeditionary Air Force), served in the Pacific against Japan during World War II. It consisted of 25 aircraft and had 300 airmen and supporting staff. The 201 Squadron completed 96 combat missions over the Philippines and Formosa, now called Taiwan. It is the only unit of the Mexican armed forces ever to see overseas combat.[9]

On January 1, 1994, the day the North American Free Trade Agreement (NAFTA) came into effect, hundreds of guerrillas from the previously unknown Zapatista Army of National Liberation (EZLN) occupied several towns and cities in the southern state of Chiapas.

The FAM was mobilized to support Army units, sending almost every available helicopter to the territory of operations. Units involved included the recently formed 214th and 215th Special Operations Squadrons, equipped with a mix of Bell 212 assault- and MD.530F scout helicopters. Up to 40 helicopters were deployed to support an initial deployment of 10,000 ground troops.

Pumas, Bell 205s, 206s and 212s from the 209th were also deployed, however, FAM's helicopter assets were scarce and the Mexican Army had to rely on almost every other government agency's helicopters for general support tasks. Almost any flyable aircraft from the National Attorney's Office (PGR) was also deployed, including Bell 206s and 212s, as well as the Navy's recently acquired Mi-8MTV-1s. Eventually the Army deployed some 70,000 ground troops and air support proved to be insufficient; hence the decision was taken to considerably expand the FAM's helicopter fleet.

By December 1994, FAM had bought additional 12 armed MD.530MG 'Defender' and four UH-60L Blackhawk helicopters,[10] which it grouped into the 216th Special Operations Squadron. This unit was the spearhead of operation "Arco Iris" (Rainbow) to re-take several towns that had fallen under rebel control in January 1994. The new militarized Defenders came armed with M2AC machine-guns and LAU-68A 70-mm rocket launchers. Three additional units were ordered in 1996 and delivered as attrition replacements in March 1998. Black Hawks wore 1191 to 1194 serials and are being used for special operations.

Although the FAM received 18 surplus Bell 206s from the Attorney General's office (PGR) in the mid-1990s, the main need identified by the FAM High Command was for a new fleet of transport helicopters that would allow it to support the Army with an adequate airlift capability.[11]

A national commander under the orders of the Secretary of National Defense is in charge of the Mexican Air Force. The second-in-command is the Air Force Chief of Staff, who supervises a Deputy Chief of Operations and a Deputy Chief of Management. The Air Force divides the country's territory into four regions: Northwestern (Mexicali, Baja California), Northeastern (Chihuahua, Chihuahua), Central (Mexico City) and Southeastern (Tuxtla Gutiérrez, Chiapas); each region is commanded by a general. The regional headquarters are in charge of 18 air bases across the country: 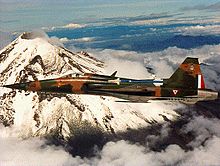 Air Force ranks are the same as in Mexico's Army, with the exception of generals.[13] 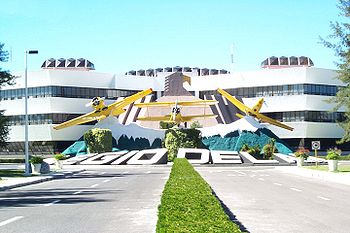 Since the National School of Aviation was opened in 1915, it took different names over the years until finally, in 1959 it joined the military school of meteorology, mechanics and aviation specialists, forming the leading campus in military aviation education: 'El Colegio del Aire' (Air College), which since September 9, 1959, has guided the formation of Air Force officers.[14] The Air Force Academy is an all academic institution of the Mexican Air Force and comprises four schools: 'Military Aviation School', 'Maintenance and Supply Military School', 'Air Force Military Specialist School', and the 'Military Troops' Air Force Speciaslist School'.[15]

Admission to the Air Force is through the mechanism of military recruitment that takes place every year at The Ministry of Defense. The FAM currently offers tertiary level studies – highlighting that of Military Pilot, which spans 4 years at the facilities of the 'College of the Air' located on the Military Air Base No. 5.

The subjects taught in pilot training include: tactics of the branches of aviation, general aviation tactics, meteorology, air navigation, air traffic control, radio communications and culture in general, along with approximately 250 hours of flight. During the first year, the training is theoretical. During the second year, Beechcraft Bonanza aircraft are used for flight instruction. During the third the cadets are trained Aermacchi SF260EU for aerobatics, and later on Pilatus PC-7 for advanced flight tactics, including combat. Within each of these stages, the cadets are trained in aerial acrobatics, stage tactical instrument flight, visual flying rules (VFR), radio operations, among others, which increase in complexity as the cadets' training progresses.[16] The first female aviator to graduate as a pilot in the history of FAM, Andrea Cruz, became a cadet at the Military Aviation School in 2007.

Military School of Air Force Specialist offers a comprehensive scholarship lasting three years for officer training meteorologists and flight control, obtaining at the graduate level of lieutenant. His duties are to provide meteorological information and control of military or civil aircraft.[17]

Military School of special troops of the Air Force is a establishment of military education that has as its mission to train sergeants in seconds aviation maintenance, supply lines, electronic aviation and military aviation. The school is located in the St. Lucía military base.[18]

To enter any of the campuses of the Air Force, SEDENA convenes a competitive entrance examination which is held each year. The requirements are:

In order to be admitted to any school of the Mexican Air Force Academy mentioned above, the applicant should also perform the following tests: physical, medical, cultural, and aviation psychology. In some cases, the psychological aeromedical 2nd level examination may also be required.[20]

Mexico has the second largest defense budget in Latin America, spending about 0.5% GDP on its military.[21] Because of the ongoing Mexican Drug War, increasing importance has been placed on acquiring airborne surveillance platforms, light aircraft, helicopters and rapid troop transport.[22]

The Air Force fleet is estimated to be at 241 fixed-wing aircraft and 117 helicopters:[1]