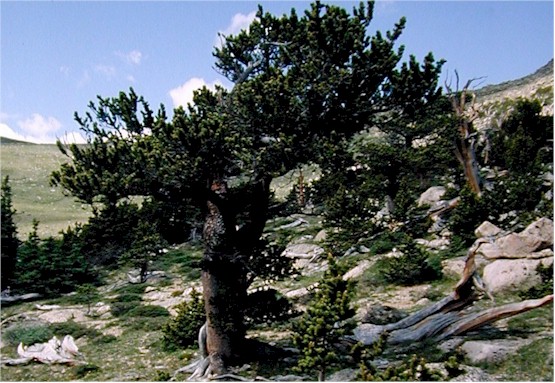 Rocky Mountains Bristlecone Pine ("Pinus aristata") is a in the group, native to the , where it occurs in the in and northern , with an isolated population in the in . It occurs at very high altitudes, from 2500-3700 m, in cold, dry subalpine climate conditions, often at the , although it also forms extensive closed-canopy stands at somewhat lower elevations.

It is a medium-size , reaching 5-15 m tall and with a trunk diameter of up to 1.5 m. The bark is grey-brown, thin and scaly at the base of the trunk. The leaves ('needles') are in fascicles of five, stout, 2.5-4 cm long, deep green to blue-green on the outer face, with confined to a bright white band on the inner surfaces. The cones are ovoid-cylindrical, 5-10 cm long and 3-4 cm broad when closed, purple at first, ripening yellow-buff when 16 months old, with numerous thin, fragile scales, each scale with a bristle-like spine 4-8 mm long. The cones open to 4-6 cm broad when mature, releasing the s immediately after opening. The seeds are 5 mm long, with a 10-20 mm wing; they are mostly dispersed by the wind, but some are also dispersed by s, which pluck the seeds out of the opening cones. The nutcrackers use the seeds as a food resource, storing many for later use, and some of these stored seeds are not used and are able to grow into new plants.

It differs most conspicuously from the two other bristlecone pine species in that the needles usually have only one, (only rarely two) resin canals, and these are commonly interrupted and broken, leading to highly characteristic small white resin flecks appearing on the needles. This character, which looks a bit like '' on the needles, is diagnostic of "Pinus aristata"; no other pine shows it (though sometimes, infestations can look superficially similar).

It is a long-lived tree, though not attaining the longevity of ("Pinus longaeva"). The oldest known tree, which grows high on Mount Evans in Colorado, was found to have at 2,435-year tree ring record. However, trees rarely live over 1,500 years.

Rocky Mountains Bristlecone Pine is by far the most common of the bristlecone pines in cultivation, where it is a very attractive slow-growing small tree suitable for small s in cold climates. Even so, it is never as long-lived as in the wild, typically living less than 100 years before it succumbs to root decay in the warmer, moister conditions prevalent in most inhabited places.