Niederkassel is an urban borough of Düsseldorf. It is on the left side of the river Rhine, bordering to Oberkassel and Lörick. 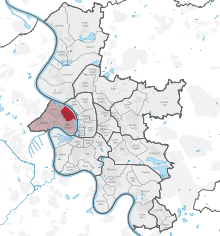 map of Düsseldorf, showing Niederkassel (in red) within District 4 (in pink)

Niederkassel was together with Oberkassel and Lörick a part of Heerdt until Heerdt became a part of Düsseldorf in 1909.