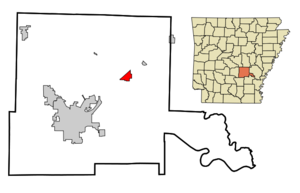 According to the , the city has a total area of 2.2 s (5.6 ), all of it land. Altheimer is part of Timberlands Region of Arkansas, a region rich in natural resources that was discovered by from the Eastern United States in the early 1800s. [ [http://www.arkansas.com/attractions/region.aspx?region=Timberlands www.arkansas.com attractions] ] hunting, bass , and are plentiful in this area.

There were 394 households out of which 35.8% had children under the age of 18 living with them, 42.1% were married couples living together, 29.4% had a female householder with no husband present, and 24.9% were non-families. 23.1% of all households were made up of individuals and 12.2% had someone living alone who was 65 years of age or older. The average household size was 3.03 and the average family size was 3.64.

The city of Altheimer was founded in 1884 by Louis Altheimer, a and business owner of descent. Altheimer, who was born in in 1850, read stories by telling of the rich natural resources in Arkansas [ [http://www.arkansaspreservation.com/pdf/publications/White_County.pdf Article containing Frederick Gerstacker's account of his time in Arkansas] ] , and left for the United States as a teenager, eventually settling in . [ [http://www.arkansasties.com/People/AltheimerLouis.htm autobiographical article of Louis Altheimer] ] Louis Altheimer brought his brother Joseph with him to the land that would eventually bear their name. Joseph's son, , became a successful , establishing the prominent law firm of Altheimer, Mayer, Woods, and Smith (later known as Altheimer and Gray), and serving twice as president of Chicago's , the city's oldest Democratic Party political club. Ben Altheimer owned 15,000 of land in Arkansas. His foundation, the Ben J. Altheimer Foundation, provided scholarships and funding for projects in the city of Altheimer and throughout the state and continues today as the Ben J. Altheimer Charitable Foundation, Inc. [ [http://www.encyclopediaofarkansas.net/encyclopedia/entry-detail.aspx?search=1&entryID=1577 www.arkansas.com attractions] ]

Altheimer has many pioneer-era log cabins, homes and museums. Some of the most prominent locations are:

* : This was once the site of of eighty white families who were moved into the area in 1936 as part of the . The lake was added to the National Register of Historic Places in 1975. [ [http://www.encyclopediaofarkansas.net/encyclopedia/entry-detail.aspx?search=1&entryID=537 Encyclopedia of Arkansas] ]

, one of the founders of the company, lived in Altheimer as a child. [ [http://www.encyclopediaofarkansas.net/encyclopedia/entry-detail.aspx?search=1&entryID=1711 Encyclopedia of Arkansas] ]