Church of the Covenant (Boston)

Church of the Covenant (Boston) 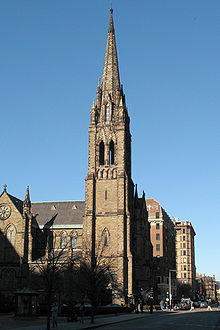 Church of the Covenant.

Built of Roxbury puddingstone in Gothic Revival style it was one of the first churches to relocate in the new Back Bay and was built largely with funds donated by Benjamin E. Bates, an industrialist who founded Bates College.[1] Designed by Richard M. Upjohn, the son and partner of Richard Upjohn, who insisted on "a high gothic edifice ... which no ordinary dwelling house would overtop."[2] It has a 240-foot (73 m) high steeple, that overtops the Bunker Hill Monument. Oliver Wendell Holmes said: "We have one steeple in Boston that to my eyes seems absolutely perfect--that of the Central Church on the corner of Newbury and Berkeley Streets."[3] In the 1890s the sanctuary was redecorated by Tiffany Glass and Decorating Co. with stained-glass windows and mosaics and an electric-light chandelier designed by Tiffany's Jacob Adolphus Holzer for the World's Columbian Exhibition, Chicago, 1893.