King William's College (Colleish Ree Illiam in Manx) is a leading world[citation needed] International Baccalaureate HMC independent school for ages 3 to 18, situated near Castletown on the Isle of Man. The College is located on two sites in Castletown; the main estate which takes pride of place on the shore of Castletown Bay, and The Buchan School which is the College's preparatory school, located in the Westhill part of Castletown, some two miles from the main campus. The College, known as KWC or to the local people as King Bill's, widened entry from boys-only to co-educational in the 1980s. Today there are roughly 500 pupils, many of whom are international.

The College was founded with financing from the Bishop Barrow Trust originally set up in 1668 to fund education in the Isle of Man, but was eventually used to found the College in 1833, which opened with only 46 boys. The coat of arms in the centre of the College's crest is that of Bishop Isaac Barrow. The school was named after King William IV who is said to have offered the founders "my most valuable possession, my name" when asked for a financial contribution.

The school features, thinly disguised, in the Victorian schoolboy book Eric, or, Little by Little by Dean Farrar who had been a student at the school. 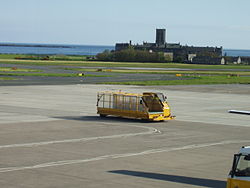 King William's College as seen across the runway from the passenger terminal at Ronaldsway Airport on the Isle of Man. 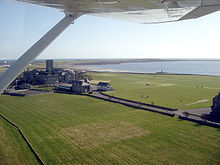 The college seen from the air.

Since 1904, the College has set an annual general knowledge test, known as the General Knowledge Paper (GKP). The pupils sit the test twice; once unseen on the day before the Christmas holidays, and again when they return to school in the New Year, after having spent the holiday researching the answers. However, the test is now voluntary. It is well-known to be highly difficult, a common score being just two correct answers from the list of several hundred. The best scores are 40 to 50 for the unseen test and about 270 out of 360 for the second sitting. Traditionally, the best scorers were given a half day free from school, while anyone doing particularly badly was given a detention.

The quiz is always introduced with the following Latin motto: "Scire ubi aliquid invenire possis, ea demum maxima pars eruditionis est", which translates as: "To know where you can find anything is, after all, the greatest part of erudition."

The quiz is popular with non-pupils, and has been published in The Guardian since 1951.

The current quizmaster is Dr Pat Cullen, a retired GP, who has been setting the quiz since 1997. He reports that he now checks questions by typing them into Google and changing them if necessary to make sure the answers cannot be found immediately.

Today the GKP is sent home to parents, there being a prize of £100 for the winning family. There is great competition between the local Manx families over this competition.

The Combined Cadet Force (CCF) is a voluntary youth organisation sponsored by the Ministry of Defence (MOD) and was until 2004 compulsory for all students in their 3rd, 4th and 5th years.

Under the auspices of the CCF, King William's College joined the Duke of Edinburgh's Award scheme in 1966. Since 2007, however, the scheme has been run independently of the cadet force.

Cadets in the Army Section learn basic military skills, such as marksmanship and fieldcraft, in addition to expedition skills. Senior cadets are responsible for the development of the training programme and the instruction of junior cadets. The training programme follows the Army Proficiency Certificate (APC) syllabus and a practical approach is adopted together with integrated scenarios. At the end of each academic year, the cadets have the chance to participate in a week-long camp at a military establishment.

The RN Section provides cadets with the opportunity to experience different water-based activities, for example sailing and kayaking. The Naval Proficiency Certificate syllabus is followed to develop seamanship knowledge and skills, such as rope-work.

The RAF Section follows the prescribed Air Cadet Proficiency (ACP) syllabus, including airmanship and navigation. Essential qualities, like self-discipline, teamwork and leadership,are developed through the conduction of practical leadership tasks and navigation activities.

The Cadet Vocational Qualifications Organisation (CVQO) has offered cadets the opportunity to receive internationally recognised BTEC Diploma qualifications. All cadets over the age of 16 may register for any of the qualifications on offer.

Former pupils, staff, and governors of King William's College may place the letters OKW after their name.