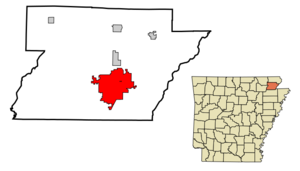 mapsize = 250px
map_caption = Location in Greene County and the state of

Paragould is a city in Greene County, , . According to 2007 Census Bureau estimates, the population of the city is 24,505. ranking it as the state's 17th largest city.

The city's name is a (combining the last names of J.W. Paramore and , the owners of the two railroads that originally crossed there) although in strict linguistic terms it would be referred to as a , portmanteau being a word that in popular usage is applied in a carefree manner to any combination of two words. It is believed to be the only city in the world with this name. Paragould is designated a micropolitan area and is also a part of the Jonesboro-Paragould . The Paragould micropolitan area's population is approximately 40,091 and the Jonesboro-Paragould Combined Statistical Area's population is estimated at 153,421.

There were 8,941 households out of which 31.9% had children under the age of 18 living with them, 53.7% were married couples living together, 11.4% had a female householder with no husband present, and 31.4% were non-families. There are 320 unmarried partner households: 291 heterosexual, 29 same-sex male, 0 same-sex female households.

27.5% of all households were made up of individuals and 13.0% had someone living alone who was 65 years of age or older. The average household size was 2.40 and the average family size was 2.92.

Paragould is home to , , , and . Paragould has two public school districts, the and the , as well as and St. Mary's private school systems.

is Paragould's only hospital. The 127-bed acute-care hospital's campus includes a professional office building with community wellness center and a building with campus offices for Arkansas Northeastern College's nursing programs.

*Two players were born in Paragould... (1918) and (1940).
*Famed bank robber and figure Frank "Jelly" Nash lived in Paragould and is entombed in Linwood Cemetery.
*Paragould's Capitol Theatre (now known as the Collins Theatre) hosted the 1941 world premiere of "The Man Who Came to Dinner" starring and Paragould's own Bill Justice, known as Richard Travis in . Travis came back to Paragould for the premiere at the Capitol where he had been employed when he lived there as well as serving as the editor of the theater's coming-attractions magazine.
*The [http://www.acic.org Arkansas Crime Information Center] recently recorded Paragould as the “Safest City in Arkansas” and Paragould was ranked as 2nd Best Place to live in America by Relocate-America's top 100 in 2004.
*Home of legislative veteran and current [http://www.arkapu.org Arkansas Association of Public Universities] Executive Director Tim Wooldridge [http://www.arkapu.org] . Wooldridge served in the Arkansas State Senate and Arkansas House. Also, he made a 2006 bid for Lt. Governor.
*Home of long time . Fisher was the 2002 Democratic Nominee for .
*Nominated for Best Oak Trees by the US Department of Outdoor Astheitics.