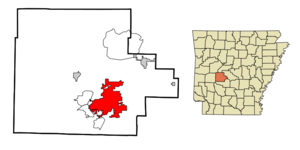 mapsize = 250px
map_caption = Location in Garland County and the state of

Hot Springs is traditionally best known for the natural spring water that gives it its name, flowing out of the ground at a temperature of 147 degrees (64 degrees ). is the oldest federal reserve in the USA, and the tourist trade brought by the famous springs make it a very successful .

The city takes its name from the natural thermal water that flows from 47 springs on the western slope of Hot Springs Mountain in the historic downtown district of the city. About a million gallons of 143-degree water flow from the springs each day. The rate of flow is not affected by fluctuations in the rainfall in the area. Studies by National Park Service scientists have determined through that the water that reaches the surface in Hot Springs fell as rainfall in an as-yet undetermined watershed 4,000 years earlier. The water percolates very slowly down through the earth’s surface until it reaches superheated areas deep in the crust and then rushes rapidly to the surface to emerge from the 47 hot springs.

Members of many Native American tribes had been gathering in the valley for untold numbers of years to enjoy the healing properties of the thermal springs.

In December 1804, Dr. and made an expedition to the springs, finding a lone and a few rudimentary shelters used by people visiting the springs for their healing properties. In 1807, a man named became the first settler of modern Hot Springs, and he was soon joined by and .

On ,, the Indians ceded the land around the hot springs to the United States in a treaty. After became its own territory in 1819, the requested in 1820 that the springs and adjoining mountains be set aside as a federal reservation. Twelve years later, in 1832, the Hot Springs Reservation was created by the US Congress, granting federal protection of the thermal waters. The Reservation was renamed Hot Springs National Park in 1921.

The outbreak of the Civil War left Hot Springs with a declining bathing population. After the Confederate forces suffered defeat in the in March 1862, the Union troops advanced toward the Confederate city of Little Rock. Confederate Governor moved his staff and state records to Hot Springs. Union forces did not attack Little Rock, and the government returned to the capital city on , .

Many residents of Hot Springs fled to or and remained there until the end of the war. In September 1863, Union forces occupied Little Rock. During this period, Hot Springs became the prey of guerrilla bands loosely associated with either Union or Confederate forces. They pillaged and burned the near-deserted town, leaving only a few buildings standing at the end of the Civil War.

After the Civil War, an extensive rebuilding of bathhouses and hotels took place at Hot Springs. The year-round population soared to 1,200 inhabitants by 1870. By 1873 six bathhouses and 24 hotels and boardinghouses stood near the springs. In 1874, Joseph Reynolds announced his decision to construct a narrow gauge from Malvern to Hot Springs; completion in 1875 resulted in the growth of visitation to the springs. Samuel W. Fordyce and two other s financed the construction of the first luxury hotel in the area, the first Arlington Hotel which opened in 1875.

During the Reconstruction period, several conflicting land claims reached the U.S. Congress and resulted in an , ruling that the land title of Hot Springs belonged to the federal government. To deal with the situation, Congress formed the Hot Springs Commission to lay out streets in the town of Hot Springs, deal with land claims, define property lines, condemn buildings illegally on the permanent reservation (now the national park) and define a process for claimants to purchase land. The commission surveyed and set aside convert|264.93|acre|km2 encompassing the hot springs and Hot Springs Mountain to be a permanent government reservation. Another convert|1200|acre|km2 became the Hot Springs townsite, with convert|700|acre|km2 awarded to claimants. The townsite consisted of 196 blocks and convert|50|mi|km of streets and alleys. The remaining portion of the original four sections of government land consisted of hills and mountains which were mostly unoccupied, and Congress acted on the commission's recommendation in June of 1880 by adding those lands to the permanent reservation.

On , , a fire broke out on Church Street a few blocks southeast of Bathhouse Row, near the Army and Navy Hospital. The fire burned southeast, away from the hospital, until the wind reversed an hour later. Racing toward the business section, it destroyed the Ozark Sanitarium, and the high school on its way across Malvern Avenue. Along the way it consumed the Public Utilities plant, which destroyed the firefighter's water supply. A wide front then was blown toward Ouachita Avenue which destroyed the Garland County Court House. The Hot Springs Fire Department fought alongside the Little Rock Fire Department, which had rushed over on a special train. Despite their efforts numerous homes, at least a hundred businesses, four hotels, the facilities, and the Crystal Theater were destroyed. A rainstorm finally quenched the blaze at Hazel Street. Although Central Avenue was ultimately protected (primarily by desperate use of dynamite), much of the southern part of the city was destroyed. Damage was estimated at $10,000,000 across 60 blocks. [ cite web|url=http://www.oldstatehouse.com/educational_programs/classroom/arkansas_news/detail.asp?id=559&issue_id=41&page=1 |title=Hot Springs Again Hit by Fire |accessdate=2008-03-30 |date=1984 Fall |work=The Arkansas News |publisher=Old State House Museum ] [cite news | first= | last= | coauthors= | title=$6,000,000 DAMAGE IN HOT SPRINGS FIRE; Thirty Blocks of Arkansas Resort Swept Away Within a Few Hours. | date=1913-09-06 | publisher="" | url =http://query.nytimes.com/gst/abstract.html?res=9C0CE2DC113CE633A25755C0A96F9C946296D6CF | work ="The New York Times" | pages = | accessdate = 2008-03-30 | language = ]

Illegal became firmly established in Hot Springs during the decades following the Civil War, with two factions, the Flynns and the Dorans, fighting one another throughout the 1880s for control of the town. Frank Flynn, leader of the Flynn Faction, had effectively begun paying local law enforcement officers employed by both the Hot Springs Police Department and the Garland County Sheriff's Office to collect unpaid debts, as well as to intimidate gambling rivals. This contributed to the March 16th, 1899 . Of the seven Hot Springs police officers that have been killed while in service of the department, three died during that gunfight, killed by deputies of the Garland County Sheriff's Office. One part-time deputy sheriff was killed also, by the Hot Springs officers.

Along with its Bathhouse Row, one of downtown Hot Springs' most noted landmarks is the Arlington Hotel, a favored retreat for .

Hot Springs eventually became a national gambling mecca, led by and his Hotel Arkansas casino. The period 1927-1947 was its wagering pinnacle, with no fewer than ten major casinos and numerous smaller houses running wide open, the largest such operation in the United States at the time. Hotels advertised the availability of prostitutes and off-track booking was available for virtually any horse race in North America.

Local law enforcement was controlled by a political machine run by long-serving mayor, Leo P. McLaughlin. The McLaughlin organization purchased hundreds of poll tax receipts, many in the names of deceased or fictitious persons, which would sometimes be voted in different precincts. A former sheriff who attempted to have the state's anti-gambling laws enforced and to secure honest elections was murdered in 1937. No one was ever charged with his killing. Machine domination of city and county government was abruptly ended in 1946 with the election of a "Government Improvement" slate of returning World War II veterans led by Marine Lt. Col. , who was elected prosecuting attorney. A 1947 grand jury indicted several owners and promoters, as well as McLaughlin, for public servant bribery. Although the former mayor and most of the others were acquitted, the machine's power was broken and gambling came to a halt as McMath led a statewide "GI Revolt" into the governor's office in 1948. Illegal casino gambling resumed, however, with the election of Orval Faubus as governor in 1954. Buoyed into 12 years in office by his popular defiance of federal court desegregation orders, Faubus turned a blind eye to gambling in Hot Springs.

Gambling was finally closed down permanently in 1967 by two Republican officeholders, and Circuit . Rockefeller sent in a company of state troopers to shutter the casinos and burn their gaming equipment.

The military took over the enormous Eastman Hotel across the street from the Army and Navy Hospital in 1942 because the hospital was not nearly large enough to hold the sick and wounded coming in. In 1944, the Army began redeploying returning overseas soldiers; officials inspected hotels in 20 cities before selecting Hot Springs as a redistribution center for returning soldiers. In August 1944 the Army took over most of the hotels in Hot Springs. The soldiers from the west-central states received a 21-day furlough before reporting to the redistribution station. They spent 14 days updating their military records and obtaining physical and dental treatment. The soldiers had time to enjoy the baths at a reduced rate and other recreational activities. The redistribution center closed down in December 1945 after processing more than 32,000 members of the military. In 1946, after the war, the Eastman was demolished when the federal government no longer needed it.

Hot Springs is also noted as the boyhood home of former U.S. President and famed American actors and . Metropolitan diva was a resident for many years. Decorated combat aviators and were Hot Springs natives who served as reform mayor and sheriff, respectively (1947-1949), before resuming their Air Force careers. The town was a haven for s in the 1930s, including longtime resident and .Hot Springs was the home of prominent Democratic , a member of the from 1950-1972 and the Garland County administrative judge from 1947-1950.

, consisting of eight turn-of-the century historic buildings, lies within Hot Springs National Park and is managed by the , . Only one of the bathhouses, The Buckstaff, remains in operation. However, another bathhouse, the Fordyce, has been converted into a museum to give tourists a glimpse into the fascinating past of the city. The federally-protected natural thermal waters are also used for thermal bathing at several downtown hotels and a hospital. The water is available free for drinking at several fountains in the downtown area.

The city has been a tourist mecca for generations due to the thermal waters and attractions such as Oaklawn Park, a thoroughbred racing facility; Magic Springs & Crystal Falls theme parks; a fine arts community that has earned the city the No. 4 position among “America’s Top 100 Small Arts Towns”; the ; and the Hot Springs Documentary Film Festival, held each October at the historic Malco Theater, one of the top documentary festivals in the world,Fact|date=June 2008 attracting numerous -winning films and producers.

Hot Springs is also home to Oaklawn Park, a thoroughbred racetrack which has been in operation since 1904. The meet which is annually held from January through mid-April each year is sometimes referred to as the "Fifth Season" and features the "Racing Festival of the South" during the last week of the racing season each April. Many contenders compete in the Arkansas Derby, which is the big finale each year of the meet. Former U.S. President Clinton, his brother Roger, and Billy Bob Thornton, all Hot Springs natives, have been known to frequent Oaklawn Park in the past.

Educational institutes and conventions are also important events in the spa city. Perhaps the most popular of these events is the Hot Springs Technology Institute (HSTI), drawing over 1300 participants each June. Hot Springs is also home to the annual alternate reality game " Midnight Madness", based on the movie from which it gets its name. Teams race throughout the city at night, solving clues based on difficult puzzle and physical challenges. Games last 12 hours or more, with the winning team designing next year's game.

The Hot Springs is the "Sentinel-Record", originally part of the chain, since renamed WEHCO.