Morfa is a district of Swansea, Wales. It straddles the Bon-y-maen and Landore wards and generally covers the eastern part of the district of Landore. Morfa was mainly an area of light industry in the late 20th Century. Until the development of the Morfa retail park and Liberty Stadium in the new millennium, the area was mainly a local sports and leisure complex, which comprised Morfa Stadium, a dry ski slope and outdoor field sports facilities with artificial surfaces.

Morfa is originally an old Welsh word for "marsh", not so much used in current parlance but found in Welsh placenames.

On the east bank of the River Tawe stood the Morfa stadium, indoor and outdoor tennis courts and rubber surfaced football fields. On the west bank were large grass playing fields which were also used for outdoor concerts. The west bank was re-developed into the Liberty Stadium complex, while the east bank was re-developed into the Morfa retail park. Part of the old sports complex on the east bank included the Swansea ski centre, a dry ski slope. This slope is currently closed but there are currently discussions to overhaul the slope and re-open it. Nearby is Pluck Lake known for a sighting of an unusual animal in April 2008.[1] 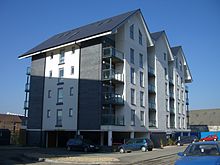 An Addis housewares factory was located on the east bank for many years. The land near the factory is now being re-developed into a private housing estate, consisting mainly of apartment blocks. About 700 new homes will be built by the developer Barratt. The name currently given to this site for marketing purposes is "The Copper Quarter".