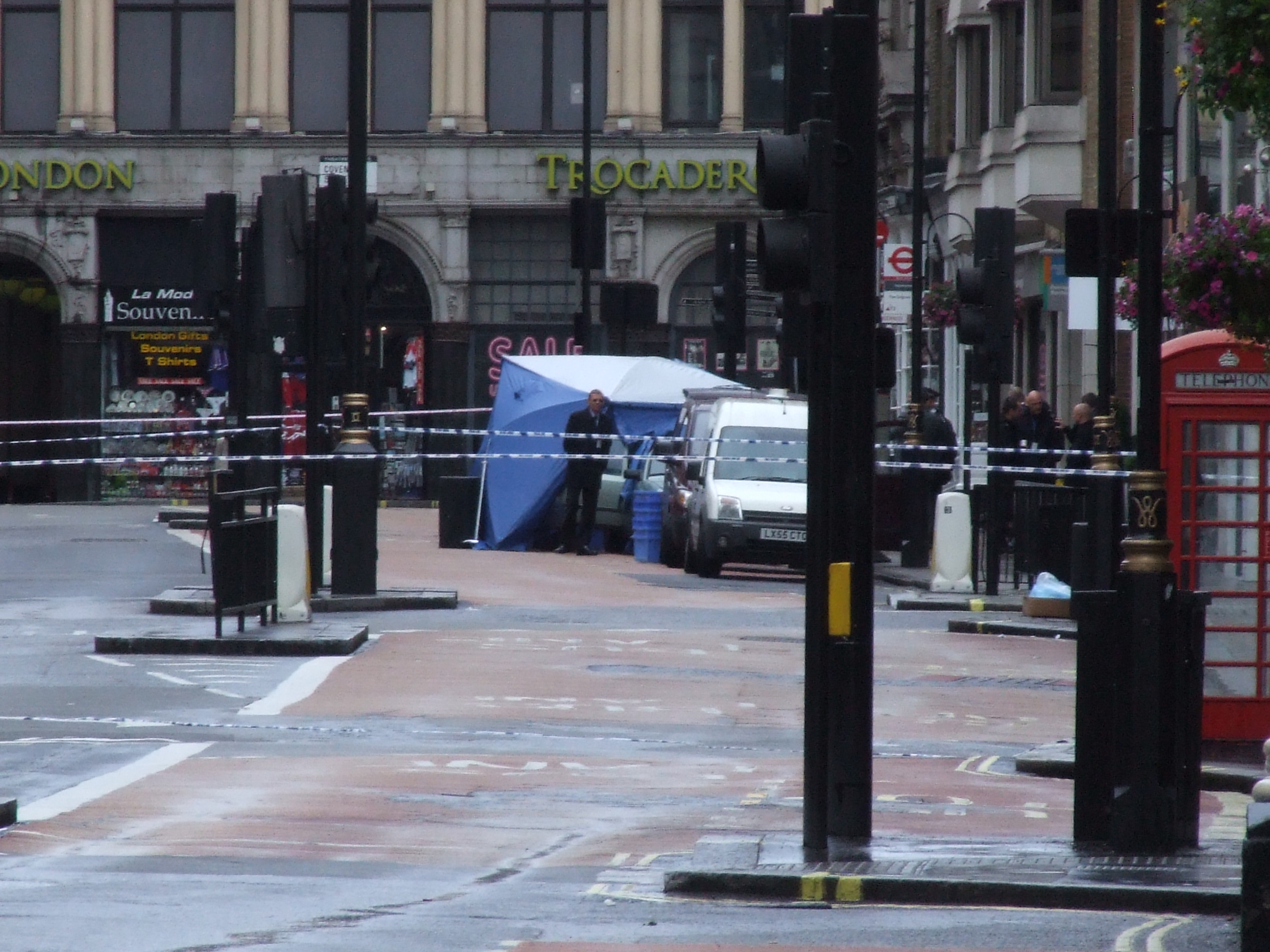 On , in , two s were discovered and disabled before they could be detonated. The first device was left near the Tiger Tiger in Haymarket at around 01:30, and the second was in Cockspur Street, in the same area of the city.

The first car was reported to the police by an ambulance crew attending a minor incident at the nightclub when they noticed suspicious fumes. [cite news|url=http://news.sky.com/skynews/article/0,,70131-1272962,00.html | title=Bomb Attempt: Police Briefing |date=| work =]

About an hour later, the car containing the second device was ticketed for illegal parking, and an hour after that, transported to the car pound at .

Both vehicles were made by , the first a light green metallic 300E saloon, registration number G824 VFK, and the second a similar model in blue.

The cars and their devices were recovered intact for forensic examination and both were found to contain petrol cans, gas canisters and a quantity of nails, with a mobile phone-based trigger.

Although this event coincided with the appointment of as Prime Minister two days earlier, Downing Street dismissed suggestions of a connection [cite news|title = Airport attack nothing to do with Brown's Scottish roots, says No 10|publisher = |date = |accessdate = 2007-07-06|url = http://news.scotsman.com/politics.cfm?id=1033262007] , although a close link was quickly established to the attack at Glasgow Airport the following day.

The vehicle has been reported to have contained 60 litres of petrol, s, and nails. [BBC News: [http://news.bbc.co.uk/1/hi/uk/6253802.stm Q&A: Car bomb investigation] , July 29, 2007] has reported that while the gas contained in the canisters and the quantity of the canisters remains unknown, they do not wish to increase speculation and that further details will be given after they have been analysed by forensic experts. The head of Scotland Yard's counter-terrorism command said, "It is obvious that if the device had detonated there could have been serious injury or loss of life." However, the device could not have detonated, because it lacked an oxidizer, according to a columnist for The Register (UK). [http://www.theregister.co.uk/2007/06/29/more_fear_biscuits_please/] [http://www.theregister.co.uk/2007/07/02/terror_idiocy_outbreak/] This information may have originated from an interview of former counter-terrorism officer Larry Johnson, conducted by of MSNBC on 29 June.

According to "", the gas cylinders contained gas, used for s.

U.S. officials told that three men have been identified and are believed to be from . Furthermore, the network reported that one of the three men could be an associate of , an n convert to Islam who was sentenced to life in prison in 2006 for plotting to fill limousines with explosives similar to those found in these incidents and park them in garages beneath hotels and office complexes. Bharot, whom police described as a high-level operative, also planned to attack five financial landmarks in the United States: the and the in ; the and the , both in ; and the Prudential Building in . are denying claims from a report by that police had a "crystal clear" picture of one suspect from CCTV footage. [MSNBC and NBC News: [http://www.msnbc.msn.com/id/19516724/ U.K. police hunt for London car bomb plotters] , June 30, 2007]

A 27-year-old doctor from India, was arrested at in Australia on 2 July in connection with the bombings in the UK. He was arrested while trying to board a flight with a one way ticket to , India, apparently to visit his newly born daughter. The arrest followed information received from the UK. [Daily Telegraph July 5 [http://www.telegraph.co.uk/news/main.jhtml?xml=/news/2007/07/05/nterror205.xml] ] As the case against him collapsed, Dr. Haneef was released with all charges dropped. [The Age July 27 [http://www.theage.com.au/news/national/terror-charges-dropped/2007/07/27/1185339250715.html] ] A second doctor was detained at the Gold Coast Hospital by police on 3 July 2007 and was later released.Fact|date=July 2007

A spokesperson for stated that the route of their march, set for , would be unchanged although extra precautions such as removing bins would be implemented. [cite news|url=http://www.pridelondon.org/ | title=Car bomb found in London |date=| work =] The police do not think the attacks were targeted at the event. Other suspicious vehicles in Park Lane and [cite news|url=http://uk.reuters.com/article/topNews/idUKL2919779720070629 | author=Peter Graff and Mark Trevelyan| title=Police find two car bombs in central London |date=| work =] were investigated by police, as well as reports of suspicious cars in other areas of the UK, such as , [cite news|url=http://news.bbc.co.uk/1/hi/england/merseyside/6253720.stm | title=Police lift town exclusion zone |date=| work =] which suffered a 1993 bomb attack by the .

Office workers, students and tourists were still enjoying a Friday night out in London only hours after the discovery of the bombs. Bars and clubs remained open and London mayor urged the capital's communities to work together to defeat the terrorism threat. [Rupert Neate, Rachel Williams and Helen Pidd: [http://www.guardian.co.uk/terrorism/story/0,,2115283,00.html Bomb alerts and travel chaos fail to deter West End revellers] , "The Guardian", June 30, 2007]

Security at Wimbledon was increased as a result of the incident. [cite news|url=http://www.tennis.com/news/news.aspx?id=89624 | author=AP| title=Security increased at Wimbledon due to terrorist threat |date=| work =Tennis.com] Whitehall sources later stated that "international elements" were believed to be involved with the bomb.

has reported that a message appeared on the widely used ist at 08:09, , stating: "Today I say: Rejoice, by Allah, London shall be bombed." The message went on to mention the recently announced knighthood of "Satanic Verses" author . [cite news|url=http://www.cbsnews.com/stories/2007/06/29/terror/main2997517.shtml | author=Tucker Reals |title=Was London Bomb Plot Heralded On Web?|date=| work =]

The following day, in another incident, a Jeep Cherokee was set on fire and driven into the main departure terminal of causing minor damage. Two men, believed to be of Asian appearance, were arrested at the scene. One, who had been on fire, was taken to a nearby hospital and the other to a police station. announced that the attack is being treated as a terrorist attack and that the United Kingdom terrorism threat level has been elevated from "Severe" to "Critical", meaning "further attacks are expected imminently". In a press conference Glasgow police said this attack and the car bombs in London are believed to be linked. [BBC News: [http://news.bbc.co.uk/2/hi/uk_news/scotland/6257194.stm Blazing car crashes into airport] , June 30, 2007] [UK Home Office: [http://www.homeoffice.gov.uk/security/current-threat-level/ Current Threat Level] ] [Mark Townsend, Jo Revill and Paul Kelbie: [http://www.guardian.co.uk/terrorism/story/0,,2115693,00.html Glasgow attacked as terror threat spreads] , "The Guardian", June 30, 2007] . The BBC reported that a mobile phone found after the arrest of the Glasgow suspects contained the numbers of those involved in the London bombing attempts. The Metropolitan Police say this is the first evidence they have linking the events.Fact|date=July 2007

In the White House press secretary said "There is no specific or credible evidence of any threat of any kind against the United States of America." Secretary said there were no immediate plans to raise the U.S. national threat level, now at yellow, or elevated. In Mayor said police would work extra hours in more locations. The police department increased patrols at high profile tourist areas such as , as well as the subways. Officers were told to give extra attention to parking garages and any suspicious vehicles. After the Glasgow attack patrols were increased at some airports. [

On a suicide note was found that police said belonged to two of the suspects. [ [http://www.cnn.com/2007/WORLD/europe/07/04/london.investigation/index.html UK terror police find suicide note] ]

On , gallantry awards for two of the police officers involved in defusing the devices were gazetted. Paul Humphrey received the (the third highest such medal in the UK honours system), and Gary Anthony Wright received the . [LondonGazette|issue=58544|supp=yes|notarchive=yes|startpage=18305|endpage=18306|date= |accessdate=2008-01-10]