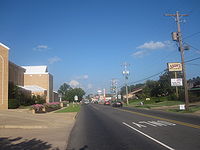 Another glimpse of downtown Magnolia 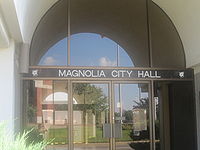 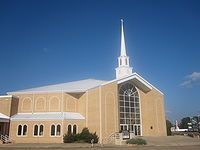 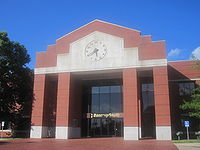 Bancorp South in Magnolia is located across from City Hall. 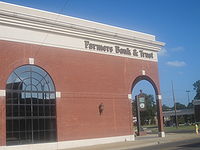 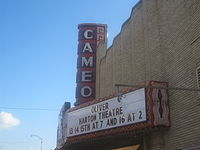 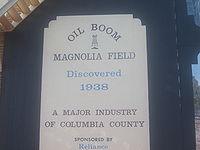 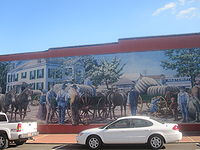 Magnolia is a city in Columbia County, Arkansas, United States, that was founded in 1853. At the time of its incorporation in 1858, the city had a population of about 1,950. The city grew slowly as an agricultural and regional cotton market until the discovery of oil just east of the city in March, 1938, with the Barnett #1 drilled by the Kerr-Lynn Company. The Magnolia Oil Field was an important discovery, not just for the city but for the nation, as it was the largest producing field (in volume) during the early years of World War II, helping to fuel the American war effort. According to 2006 Census Bureau estimates, the population of the city is 10,951 according to the U.S. Census Bureau reports of 2009. The city is the county seat of Columbia County[1]. It is also home to the World's Largest Charcoal Grill and the World Championship Steak Cookoff, part of the Magnolia Blossom Festival.

The city operated under a city council form of government until 2003. Voters elected to convert the city to a strong-mayor form of government, making the mayor's position a full-time position with veto power. Lane Jean was elected mayor in 1996.[3][4][5] The city employs approximately 50 individuals in 7 different departments, including the Police Department, the Fire Department, and Parks and Recreation.

Average Temperature: 64°. Average Rainfall: 50.3 inches http://www.magnolia-ar.com. The winters are mild but can dip into the teens at night and have highs in the 30s and even some 20s but average out around 50. The Springs are warm and can be stormy with strong to severe storms average highs in the mid 70s. Summers are often hot and humid and dry but with occasional isolated afternoon storms, highs in the mid to upper 90s and even 100s. In the fall the temps cool from the 90s and 100s to 80s and 70s. Early fall temps are usually in the 80s but can reach 90s and at times has reached 100. Late fall temps fall to 70s and 60s. It is not uncommon to see snow and ice during the winter. It has been known to snow a few times as late as April and as early as November in Magnolia.

There were 4,204 households out of which 28.6% had children under the age of 18 living with them, 40.2% were married couples living together, 17.9% had a female householder with no husband present, and 38.7% were non-families. Of 4,204 households, 101 are unmarried partner households: 91 heterosexual, 4 same-sex male, 6 same-sex female households. 34.6% of all households were made up of individuals and 16.6% had someone living alone who was 65 years of age or older. The average household size was 2.33 and the average family size was 3.01.

Magnolia when it was founded was a cotton, farm production, and marketing town. Slowly the town grew and in 1909 the Third District Agricultural School, subsequently known as Magnolia A&M and Southern State College, now known as Southern Arkansas University, was founded. During World War II Magnolia became a heavy manufacturing city. In 1938 oil and natural gas was discovered near the city in what was called the Magnolia Oil Field; the largest producing field by volume in the nation during the war. The city soon became a producer in steel, lumber, aluminum, bromine, rubber coated products and fuel cells for the military.

Magnolia is also the home corporate office of Amfuel, which is the largest designer and fabricator of composite material products for aviation, aerospace, military ground forces, and commercial transport industries.

The town's primary economic focus is heavy industrial, including Albemarle Corporation's Bromine Products Division (which has two facilities near town), Amfuel (which produces fuel cells for the military), and Sapa's extruded aluminum products facility. Also located in the area are several oil and brine drilling companies, many of which are locally owned, and timber companies, such as Deltic and Weyerhaeuser.

The unemployment rate in Magnolia, AR, is 9.40%, with job growth of -0.40%. Future job growth over the next ten years is predicted to be 29.70%, according to Sterling's www.bestplaces.net/city/Magnolia-Arkansas.aspx. The U.S. unemployment rate average for the month of June is 9.2%, Arkansas' average is 7.2%.

Magnolia is also home to the Magnolia Blossom Festival and World Championship Steak Cookoff. The festival has been featured on the Food Network and attracts 40,000+ to the event.

Magnolia is also known locally for its downtown shopping on the square and its natural beauty. One contributing factor to its beauty are the downtown murals, one of which was signed by Charlton Heston.

Magnolia High School is known for its boys' basketball teams winning 7 State Championships, 1 Overall State Championship (which is no longer played in Arkansas), and 19 conference titles. The most recent State Championship was in 1997 and the most recent appearance was in 2006. The recent conference titles were in 1999, 2006, and 2007. The Magnolia Panthers compete in [Arkansas Activities Association|Arkansas Activities Association's] 5A-Southwest conference. Magnolia is also frequently the lead school in test scores in southwest Arkansas.[citation needed] Since 1999 Magnolia High School gradutates have received well over $1 million in scholarship money each year, with the class of 2008 being first to reach $2 million in scholarship offers.

Magnolia is the home of Southern Arkansas University, a public university that offers four-year and advanced (Master's level) degrees in business, public administration, computer information systems, education, counseling, education administration, and criminal justice. With a student body of over 3,100, its most notable programs are agriculture, business, and education. The university's cultural focus is Harton Theatre, which provides a venue for both departmental plays, concerts, and local cultural events.