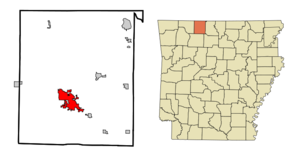 mapsize = 250px
map_caption = Location in Boone County and the state of

Harrison is a city in Boone County, , . According to 2005 Census Bureau estimates, the population of the city was 12,764.

Harrison is the principal city of the Harrison Micropolitan Statistical Area, which includes all of Boone and Newton counties.

There were 5,259 households out of which 28.7% had children under the age of 18 living with them, 48.3% were married couples living together, 10.8% had a female householder with no husband present, and 38.0% were non-families. 33.7% of all households were made up of individuals and 14.6% had someone living alone who was 65 years of age or older. The average household size was 2.22 and the average family size was 2.84.

Harrison is nationally recognized as one of the "Best Small Towns in America."

Harrison is home to Cavender's Greek Seasoning, the general office of FedEx Freight, the second Wal-Mart store ever opened, and Claridge Products, which is the largest Whiteboard, manufacture in the United States. The courthouse, opened in 1909, serves as the heart of the downtown district and is still in operation today.

Harrison was one of the first few towns in Arkansas to have a library. The library opened in 1903 with 600 donated books.

Hemmed-in-Hollow, the tallest waterfall between the Rocky Mountains and the Appalachians is near Harrison and stands at 209 feet tall. Just around the corner, on the same bluff line is Diamond Falls. At 148 feet, it is the second tallest in the state.

The historic Lyric Theater is now used for plays, community events, old movies and other gatherings. It was originally opened as a movie theater in 1929.

The North Arkansas Regional Medical Center is located in Harrison, and has been recently renovated to better serve the community.

=Education= Residents are served by the [http://harrison.k12.ar.us/] . The history of Harrison Schools dates back to August 1841 when Joseph Burkett and his family traveled overland from Tennessee, stopped overnight on the banks of Crooked Creek and decided that it would be useless to go farther in search of a home rich in all the bounties of nature. He was soon followed by James Stiffler, L.D. Rush, Captain H. W. Fick, and several others This small handful of sturdy citizens began at once to plan for a school. Captain Fick donated a block of land for the purpose of building a public school on the site that is now occupied by the Administration Building. Despite the fact that they were few in number and that the materials had to be hauled more than fifty miles, the building was soon erected at a cost of fifteen hundred dollars. Around twenty-five pupils enrolled under the instruction of Professor Killo.

From a small one-room building to the present district consisting of four elementary schools, one middle school, one junior high and one senior high, Harrison has grown to an enrollment of approximately 3,000 students. Many consider the Harrison Mascot, the Golden Goblin, to be one of the most distinctive mascots in the state of Arkansas. Harrison's success in academics is paralleled by its success in extracurricular programs. The Goblin Football program, led by coach Tom Tice, has been one of the most successful of the last 30 years, making 16 playoff appearances, and winning one state title. The soccer program, led by Chris Pratt, are five-time AAAA state champions.

Unreferenced|date=April 2008 The Harrison School District is known in the surrounding area for its quality programs in the performing arts. The music program is paramount, with the band and choral programs consistently earning superior ratings at festivals and competitions. The Harrison Choral Program, directed by Michael Crouch and Thomas Rickman, won the sweepstakes award at the DC Festival in Dallas in 2003.

Harrison has been a member of the North Arkansas Association and Colleges and Schools since 1936.

In 1901 and 1905, white mobs drove the entire black population from Harrison. These events were the subject of an program entitled "Banished" on in 2008. [http://www.pbs.org/independentlens/banished/harrison.html. Accessed February 18, 2008.]

The Harrison Police Department has had two officers killed in the line of duty, both by gunfire and both within a year of one another. The first was officer Ed Williams, killed on a disturbance call on . The second was Burr Robertson, killed while arresting a suspect at the railroad station on . [ [http://www.odmp.org/officer.php?oid=14231 Ed Williams] , [http://www.odmp.org/officer.php?oid=11371 Burr Robertson] .]

, first woman elected to Congress from Idaho, was born in Harrison.

The National Trust for Historic Preservation has recognized the . It contains a large number of the city's original commercial and governmental structures, including the still-used courthouse in the center of the square, the recently refurbished [http://thelyricharrison.org/ Lyric theater] , and the beautiful 1929 [http://hotelseville.com Hotel Seville] , which underwent a complete restoration in 2008.