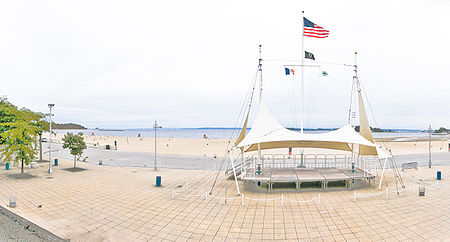 Orchard Beach is a public beach in the borough of the Bronx in New York City. The beach is part of Pelham Bay Park and is situated on the western end of Long Island Sound. Once referred to as "the Riviera of New York City",[1] the 115-acre (0.47 km2), 1.1-mile (1.8 km)-long (1.77 km) park consists of a 13-section sandy beach, a hexagonal-block promenade, a central pavilion with food stores and specialty shops, two playgrounds, two picnic areas, a large parking lot, and 26 courts for basketball, volleyball, and handball. It is operated by the New York City Department of Parks and Recreation. It is most recognized for its unique crescent shape, and beautiful view of City Island, Bronx.

While surrounded by acres of natural forest, marshlands and coastline, the beach is actually man-made. It was the urban planner Robert Moses who came up with the concept and planning for its construction. The process involved filling in approximately one third of Pelham Bay with landfill, followed by a total of 1.2 million cubic yards of sand, brought by barge from Sandy Hook, New Jersey and the Rockaways in Queens. The landfill was put between Rodman's Neck, Twin Island and Hunters Island; the latter two are no longer islands since being connected to the mainland Bronx by the landfill. In 2010 construction began on the beach jetty, extending the jetty. Approximately 268,000 cubic yards of sand was pumped onto the beach to replace sand lost over the years. The sand was dredged from the Ambrose Channel by a Great Lakes Dredge & Dock Company hopper dredge, the Padre Island, working under a contract with the U.S. Army Corps of Engineers. These acts will make the beach safer for swimmers.