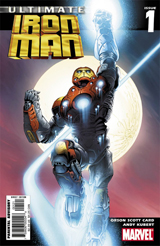 "Ultimate Iron Man" is the name of two comic book miniseries written by and published by . The stories tell the origins of the version of , who appears in .

The first volume, which published between 2005 and 2006, was a five-part miniseries depicting the early life and origins of , and was drawn by .

The second volume is also a five-part miniseries and had its first issue released on December 12, 2007. This volume follows directly on from the first series and depicts the early uses of the Iron Man armor, art by .

"Ultimate Iron Man" #1 reveals that Tony Stark's genius is caused by an accident his mother suffered while she was carrying him in her womb. He has neural tissue throughout his body, as if his entire body is a brain, giving him tremendous mental capacity but at the cost of chronic pain akin to severe burns due to the over stimulation of neural cells in his skin. His father uses a newly invented biological armor to ease Tony's pain. Despite the pain, he is endowed with regenerative capabilities due to the same mutation that caused the neural cells to differentiate all over his body. The armor is constructed out of genetically modified bacteria that is able to group together to dissipate kinetic energy when impacted upon, and is able to dissolve any metal that can be oxidized. The disadvantage of this biotech armor, however, is that it will dissolve the wearer's skin after a few hours and will need to be washed off with water and soap.

In "Ultimate Iron Man" #2, young Tony Stark is shown covered in the blue skin-armor developed by his father in issue #1. Attempting to learn how to manufacture the bio-armor, Zebediah Stane kidnaps and tortures Tony.

In issue #3, Tony's father arrives with a team and arrests Zebediah. After the incident, a transparent version of the armor is developed, and Tony begins attending a prep school. The story then fast forwards to an older Stark who develops a prototype power-armor and befriends fellow student James Rhodes.

"Ultimate Iron Man" #4 follows Tony Stark, shortly after befriending Rhodes, getting in a scuffle with bullies that nearly leaves him dead. Discovering that the bullies were following orders from an unknown individual, Stark's father decides to enroll Stark, Rhodes, and Nifara, who witnessed the attack, into the Baxter Building. Also enrolled in the school is Obadiah Stane, his father's ex wife's son. Shortly after their arrival, Stark witnesses Obadiah murder a pair of students and make it look like an accident. This incident hardens Stark's resolve to improve his armor and punish Obadiah. At this point, he has already begun to build a suit that closely resembles a traditional Iron Man suit.

"Ultimate Iron Man" #5 shows that shortly after his father's arrest based on planted evidence (by Obadiah) at the gruesome murder of his enemy Zebediah Stane, Tony gets a taste of champagne at a party held by his father. The alcohol affects his brain more than a normal human due to his decentralized brain tissue. He later says that while he was intoxicated, it was the first time in his life he was not in chronic pain. Then two prototype variations of the suit are shown. One is roughly 6 feet tall, designed for more practical testings, while the second is a large suit at least 20 feet tall, for designing any additions to the traditional suit before including them to the more restricted design. The suit doesn't fly, but hovers or bounces and is not completely stable. Stark is forced to use the 20 foot prototype to foil a terrorist plot to destroy his building. Though Tony is successful, the terrorists manage to detonate the bomb prematurely and completely destroy the suit.

Tony Stark survives being blown up inside his prototype suit of armor. Unfortunately for him, the attempted murder is only the least of his problems. Tony's father is still wrongly imprisoned for the murder of rival Zebediah Stane, and teenage Tony is forced to run Stark Enterprises in his stead. After seeing the prototype armor in use, the military wish to use the armor themselves. Convincing the military that the armors are in fact robots, both Tony and Jim Rhodes (Ultimate War Machine) suit up and go on the mission masquerading as robots. They complete the mission, and find a map that leads them to believe there are nukes in New York. Tony begins trying to find a way to release his father from jail and find out who the terrorists were that tried to blow up his building.

Obadiah is working with a man named Dolores, who is responsible for the terrorist attack on the Stark building from volume 1, and Dolores convinces Obadiah to try and murder Tony's father. Obadiah drugs a prison guard with a "hypnotizing" bio-drug, and the guard tries to kill Tony's father. He fails, but Tony's father gets shot in the process and is in ICU. Tony sends one of his "robots" to protect his father in the hospital.

Tony goes to Obadiah’s house in the Iron Man armor and confronts him on setting up his father and sending him to prison. Obadiah says it was all Dolores' idea, and sets up a meeting with Dolores and Tony. Obadiah also figures out that the armor is not a robot, and that Tony is actually inside, a fact he shares with Dolores before he meets with Tony.

Dolores and Tony make a deal. Dolores will give Tony the information about the terrorists with nukes who plan to bomb the city, and Tony will give Dolores on of his "robots." Tony, knowing that Dolores knows he wears the armor personally decides to trick him and actually bring an Iron Man suit that is remote controlled. Dolores and Tony meet on a place together, holding each other hostage while their friends confirm each others end of the bargain. Dolores is skeptical because the Robot isn't walking smoothly and is clumsy, and Tony is skeptical because the feds found a nuke but no terrorists with it, and the deal for terrorists. Dolores men plan to kill the feds who delivered them the robot, but Ultimate War Machine shows up to save them.

Tony then realizes that Dolores is no longer on the plane, and upon breaking into the cockpit he sees another nuke. He can't disable it, because then a separate bomb will go off, destroying the nuke and plane. War machine goes to Dolores' Mansion, only to find him dead. Someone booby trapped his piano, and it blew up in his face while he was playing. Tony flies the plane low enough to the water that Obadiah can jump off into the water. He then gets his nanobots to disarm the nuke and set off the smaller bomb while he attempts to jump off the plane. They realize that another arms dealer was out to kill everyone. (Dolores, Obadiah, and Tony.)

Meanwhile, Tony's father is recovered enough to go to prison, but the guards sent to escort him were not sent by the Police Department. Tony's father fights them off and escapes. Tony meets with him, and says that he thinks Loni, his father's first wife, is the mastermind behind the scenes trying to kill them. Tony, his father, War Machine, and Obadiah set off to Utah to find Loni. They arrive and their chopper explodes injuring War Machine aka Rhodes. Obadiah fall off a cliff, but Iron Man catches him as terrorists arrive on the scene. Iron man flees, but follows them as the take Obadiah to his mother, Loni, and their hideout. Iron Man breaks into the compound and Loni floods it with poison gas trying to kill him, again abandoning Obadiah. Iron Man saves Obadiah, but his father is taken captive by Loni. She confesses that all she ever wanted was power. That’s why she married him, divorced him, remarried, has Obadiah, AND killed her second husband.

Iron Man shows up, and Loni shoots his father in the chest, threatening to shoot him again if he doesn't take the suit off. Tony takes off his armor, and Loni shoots him in the head, not knowing that his entire body is a brain and will heal itself. Tony fights Loni, beats her, and tends to his father. Obadiah, mad that his mom abandoned him for dead with the poison gas, enters the room and kills her. They are all picked up by the feds and go home.

Iron Man has been featured in "" and "" (2006), an animated adaptation of the "." Although based on Ultimate Iron Man, this version's identity is not a matter of public record, and, as in main continuity, he is inflicted with a rather than a . provides the voice.

In "" (which is unrelated to the Ultimate Avengers adaptions), Tony Stark has been working on multiple armours in secret for some time using his company's resources. One of the armours that are seen resemble the "Ultimate Iron Man" suit.