Hamm is an urban borough of Düsseldorf. To separate it from the Westphalian City Hamm, locals often call it Kappes-Hamm (Kappes is the word for kale in the local dialect). Hamm is located on the River Rhine, neighboring to the boroughs Bilk, Volmerswerth, and the central harbour of Düsseldorf. It has about 3,700 inhabitants and is one of the smallest boroughs of Düsseldorf. 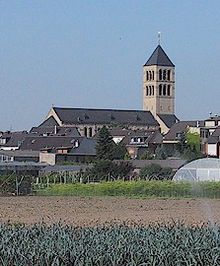 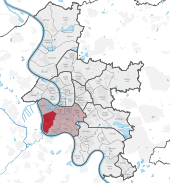 map of Düsseldorf, showing Hamm (in red) within District 3 (in pink)

In 789 A.C. Hamm was written mentioned first time, second time 875. The earliest registrations of Hamm are from the year 1218. Hamm became a part of Düsseldorf in 1394. Since 1453 there had been a ferry line between Hamm and Neuss until the Josef Cardinal Frings-Brighde was constructed. The gun club St. Sebastianus from 1458 is one of the oldest gun clubs in that region. The Thirty Year War began 1644 in Hamm when troops of Brandenburg went into the settlement. So the oldest churches who are still existing are the Rochus Chapel from 1709 and the Cross Chapel from 1658, gifted by the Earl of Palatine Philipp Wilhelm, both Roman Catholic. The Rochus Chapel nowadays is in use by the Greek-Orthodox Church of Düsseldorf. In 1824 a catholic elementary school opened, in 1960 the catholic kindergarten. To visit schools for higher education the students have to go to neighboring boroughs.

There is a tram line (708) connecting Hamm to the central and northern districts of Düsseldorf. Hamm has a local train (S-Bahn) station. Two of the main roads of Düsseldorf are tangent to Hamm. The kindergarten and the elementary school are still open.