The Notre Dame Rugby Football Club is the official rugby football club at the University of Notre Dame. It is the oldest collegiate rugby club in the Midwest and currently plays in the Collegiate Premier Division, the highest level of college rugby in the US.[1]

In 1963, the Notre Dame Rugby Football Club was officially founded as a club sport. The team was founded by Bob Mier, a student who participated in the Wisconsin game the previous spring. With supervising faculty member and acting head coach Kenneth Featherstone, the team formed and competed in the Midwest Conference.[3]

In April 1968, the Fighting Irish, chaperoned by Professor Peter Brady, traveled to Ireland for several exhibition matches. They went 2-3 against Irish teams, including losses to the Dublin League Champions, Navan, and runner-up, Delvin. Notre Dame was also defeated by University College Cork but gained victories over the Limerick Rovers and Thurles.[4] The Fighting Irish traveled to Ireland again in March 1974. On this trip, Notre Dame went 2-2, losing to Tralee and again to University College Cork while defeating another Limerick team, the Bohemians, and University College Dublin.[5]

After suffering a losing record their first season, the A-side went on to have 3 winning seasons obtaining a 53-12 record. Likewise, the B-side also dominated its opposition obtaining a 40-1 record that included a 33 game winning streak which was finally ended by current SuperLeague side, the Chicago Lions.[6]

During the 1965-1966 year, the Fighting Irish won the Commonwealth Cup, Nassau Invitational, Midwest Tournament, Irish Challenge Cup, and the All-College Tournament. These wins resulted in the Fighting Irish being name Collegiate Rugby National Champions by Sports Illustrated. After this season, Notre Dame offered the rugby team the chance to become a varsity sport, but this was turned down via players' vote.[7] Notre Dame was even named a "national rugby power" by the Washington Post.[8]

In the fall season of 1972, the Fighting Irish defeated longtime rival, the Chicago Lions 15-12, upsetting the 1972 Midwest Champs. The game has been considered one of the most brutal matches in recent years. One player was knocked unconscious in the first minute of play with two others being removed at half-time, one with a broken jaw and the other with a broken leg. An English official said afterwards, "I've seen teams play in Holland, England, and on the continent (Europe), but I've never seen a team hit like Notre Dame did that day.[9]" The next week, Notre Dame won a hard fought victory over rival and defending National Champions Palmer College of Chiropractic 16-15. The Irish finished the fall season at 11-2. During the spring season of 1973, Notre Dame beat rival Ohio State and reclaimed the Silver Cup, a trophy passed to the victor of that game.[10] The Fighting Irish finished the spring at 12-1, winning the Midwest Championship over the Chicago Lions, but losing the National Championship to repeat champions, Palmer.[11] The 1975 B-Team went undefeated included a 3-0 victory over the Lions in their final game on Mark Keown's 30 yard penalty kick from the right sideline.

From 1987 to 1992 the Irish returned to regional prowess, under the coaching of Art Maerlender. The team re-joined the Chicago Area Rugby Football Union and made it to the Midwest final round in each year from 1990 through 1994. The late Col. John Stephens was the long-serving faculty advisor who died in 1996. Incidents the next year invoked the "double-secret probation," that resulted in the club's banishment from campus.

The University placed the rugby club on probation twice in the '80s as a result of bad behavior. The combined weight of these events and inexcusable misconduct during the '95 spring season ultimately led to the club's disbandment on August 3, 1995. [12]

Tom McGinty and Dave Bishop deserve credit for their efforts to start a club team in the fall of 2000, eventually dubbed the South Bend Old Boys RFC, after playing for the South Bend blues the previous year and longing for a University-affiliated team [1]. This club was quite successful over the next three years at scheduling matches with high-profile teams like Michigan, Michigan State, and Tennessee, surviving and competing (and racking up an impressive record) as a self-supporting club carpooling to away games. 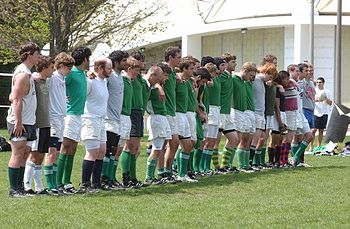 The Out Side Irish line up during the 2007 Spring season.

The OIRFC was a rugby club that was unaffiliated with the University of Notre Dame but was composed of Notre Dame and Indiana University of South Bend students. The club was founded in the fall of 2004 by junior, Mike Schmitt and sophomore, Don Greiwe as an attempt to take the team in a more serious direction. In their first season the Out Side Irish only managed to schedule a few games due to low numbers and accessibility. They practiced only once per week and barely could scrap together fifteen live bodies to play matches, however they were able to recruit a strong freshman class and the next spring managed a record of 3-4. At the end of this season John Gallagher, Christopher Liedl, and Chris Harrington decided to put together a formal application for club status with the University. After drafting a club constitution and with the support of president Don Greiwe and vice president Brian Fallon the club filed for official recognition. Practicing three times a week and posting a record of 9-1-1 the rugby club made a strong case for itself. With the support of numerous alumni and donors and after an application period of over six months the team was finally recognized in May 2007 and became the Notre Dame Rugby Football Club.

On May 18, 2007, 12 years after being banished, the University officially reinstated the Notre Dame Rugby Football Club. As an official club, the NDRFC's stated goals are to field a rugby team representing the University of Notre Dame, to compete with other club teams while abiding by the rules of the University of Notre Dame, USA Rugby, and the International Rugby Board (IRB), and to promote the physical education, mental and social well-being, and sportsmanship of members of the club through participation in and the playing of this internationally recognized sport. Following their reinstatement, the club rose rapidly through the Midwest RFU ranks after hiring Coach Sean O'Leary. O'Leary transferred from Northeastern University and acts as coach of the USA U17 national team. In the fall of their first season the Irish finished 8-1-1 against Division II competition sparking a move up to Division I in the spring and an inclusion in the Eastern Division of the Midwestern Division I league.

The NDRFC crest was designed by Jaime Urquijo and Don Whitley following the club's reinstatement in 2007. In the center of the crest is a stylized Celtic cross, reminiscent of both Notre Dame’s Irish heritage and its status as a Catholic university. Atop the arms of the cross is the club’s original 1961 date of establishment. 1961 is listed instead of 2007 so as to stress the continuity between the old club and the new club and to recognize the three decades of successful history that existed prior to the club’s disbandment.

At the bottom of the crest are the Notre Dame monogram and a shamrock similar to the one used on Notre Dame’s basketball jerseys. These symbols reaffirm the club’s strong desire to be affiliated with the University. The use of a pre-existing Notre Dame shamrock instead of the IRFU design (which was used as the club’s logo when they were the Out Side Irish) or the London Irish variant (which appeared in the first versions of the crest) is particularly significant in this regard. It is also referencing the NDRFC's logo from the 1970s. 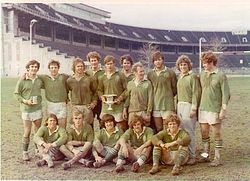 While the A-Side jerseys bear the Notre Dame colors of blue and gold, the B-Side jerseys are almost identical to those used by the Out Side Irish (which were imitations of the jerseys worn by the Irish national team). The kelly green of the B-Side jersey is a tribute to both the pre-1995 Notre Dame Rugby club as well as the Out Side Irish, whose tireless dedication and perseverance led to the club’s reinstatement. Additionally, it recalls the famous green jerseys used on occasion by the football team.

The two different jersey designs are intended to remind club members that it is a privilege and an honor to wear the Blue and Gold of Notre Dame - one that is only granted to someone who has earned a place on the A-Side.