:"CB4" may also refer to a nickname for NBA basketball player of the Toronto Raptors."Infobox_Film
name = CB4 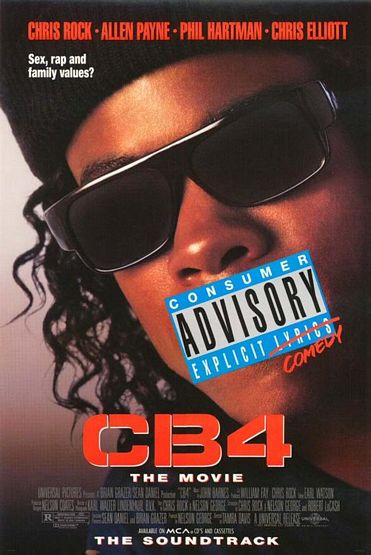 
"CB4" is a about a al named 'CB4', named after the prison block in which the group was allegedly formed (Cell Block 4). The movie parodies the rap group among other aspects. It was directed by .

The movie features short segments featuring celebrities such as , , the , , , , and .

The movie follows a group of three young aspiring rappers into fame and popularity. Longtime friends and amateur rappers Albert, Euripides, and Otis want to make their big break on the rap scene. In order to get their name heard, they must appeal to local crime lord and owner, Gusto. After a failed meeting with Gusto, the police rush in and throw him in jail. Gusto blames the group for the police raid and swears revenge when he is released from prison. However, while Gusto is locked up, Albert takes on the name of the crimelord, and Cell Block 4 becomes the hottest band on the charts with hits like "Sweat From My Balls" and "Straight Outta Locash". Their rise to fame is documented by an aspiring director.