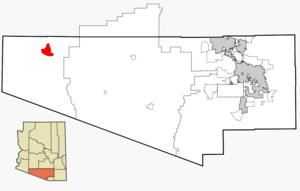 mapsize = 250px
map_caption = Location in Pima County and the state of

"Ajo" (pronounced "ah-ho") is the Spanish word for . The Spanish may have named the place using the familiar word in place of the similar-sounding O'odham word for paint ("oʼoho"). The people obtained red paint from the area.

Native Americans, and Americans have all extracted mineral wealth from Ajo's abundant deposits. In the early , there was a Spanish mine nicknamed "Old Bat Hole". It was later abandoned due to Indian raids. The first in Ajo, , on the way to the silver mines near , arrived in 1847 and found the deserted mine complete with a 60-foot shaft, ladders, and buckets. High-grade native made Ajo the first copper mine in . Soon the Arizona Mining & Trading company, formed by Peter M. Brady, a friend of Childs, worked the rich surface ores, shipping loads around for smelting in , , in the mid 1880s. The mine closed when a ship sank off the coast of . Long supply lines and the lack of water discouraged large mining companies

With the advent of new recovery methods for low-grade ore, Ajo boomed. In 1911, Col. , a and star athlete, bought the from John Boddie. He became general manager of the Calumet and the Arizona mining company and expanded it on a grand scale. In 1921, , the nation's largest copper company, bought New Cornelia and the mine became the New Cornelia Branch of Phelps Dodge, managed by Michael Curley. For several decades more than 1,000 men worked for Phelps Dodge in the . The mine closed in 1985, following a bitter strike and a depressed copper market. Ajo is now home to many retired people, agents, and young families.

Plants of the thrive at Ajo, including s and s. The Ajo lily or Desert lily, an onion-like plant, also grows in the area.

Ajo and the surrounding area is the only place in the United States where the mineral can be found.

"In the year 1884, the camp at Ajo was practically abandoned. Not a soul was in camp when Tom Childs Sr., and his son arrived. With them was of ...Childs and Jacobs located the mining claim which constituted most of the old Ajo group of mines. They made a permanent camp and worked the mines..." - The Ancient Mines of Ajo by Dan Rose

The was first found at the New Cornelia Mine, Ajo. [W.H. Blackburn and W.H. Dennen, (1997), "Encyclopedia of Mineral Names", Ottawa, Mineralogical Association of Canada]

There were 1,659 households out of which 19.7% had children under the age of 18 living with them, 51.4% were married couples living together, 10.6% had a female householder with no husband present, and 34.4% were non-families. 30.1% of all households were made up of individuals and 17.1% had someone living alone who was 65 years of age or older. The average household size was 2.23 and the average family size was 2.74.

Ajo Unified School District is the only school district in Ajo, Arizona. There is currently an , , and , all of which are located in the same area. The high school currently has a football team, team (both boys and girls) , team (boys), team (girls), team, and . They are known as the Ajo Red Raiders.