The Day Will Dawn

The Day Will Dawn 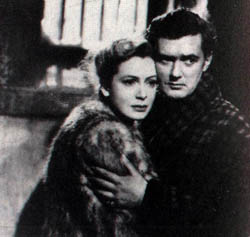 "The Day Will Dawn" is a 1942 film set in during in starring as Colin Metcalfe and directed by .

As the Germans invade Poland in September 1939, the former -correspondent Metcalfe is placed as a foreign correspondent in neutral . Eight months later, he mets a Norwegian fisherman called Alstad in a sailors' bar, where a scuffle breaks out between British and Norwegian sailors (singing , egged on by Metcalfe) and German ones (singing a German song). [This scuffle is reminiscent of a similar stand-off in "Casablanca", also released in 1942] Alstad takes him aboard his boat during a sea voyage in Norway's territorial waters, during which they sight the "Altmark" and are fired upon by a German , despite Norway's neutrality. They then come back to his home port of Langedal, and Metcalfe goes to to report this to the British embassy there, despite the best efforts of the Kommandant and the German-sympathising local police chief Gunter. There Metcalfe meets Lockwood en route back to England from the in . It was Lockwood who had got him the foreign correspondent job at the outbreak of war, but he now passes on the news to Metcalfe that he has been fired from it for sailing out with the fisherman rather than staying on dry land where the paper can contact him. Metcalfe informs the embassy, and also warns his paper of signs that a German war on Norway is imminent. Alstad's daughter Kari (who had accompanied them on their voyage) also meets him to tell him of suspicious German merchant ships at Bergen which her father suspects have troops on board.

The pair say goodbye and Metcalfe, getting into what he thinks is a taxi, is kidnapped by the Germans and put on board a ship bound for the German port of . Meanwhile, Germany invades, Metcalfe is scooped on the news of the invasion, and - back in Britain - Chamberlain's government falls and Churchill becomes prime minister. A British warship intercepts the ship on which Metcalfe is held and liberates him but she is re-routed to to help , the evacuation of British troops from north-western France, before she can get Metcalfe back to Britain. Amidst the carnage on the docks at Cherbourg, Metcalfe finds Lockwood, dying of wounds.

Back in Britain as the begins, Metcalfe is convinced not to join up and instead to start a press campaign for the public to make economies on the Home Front to help win the Battle of the Atlantic. Just about to set out on it, he is called upon by the to be parachute-dropped back in Langedal [By the SOE, though this is unnamed in the film.] , sabotage a camouflaged U-boat base nearby, and escape across the border into neutral Sweden. On landing, he is spotted and pursued by the Germans, but manages to escape and gain shelter. There he finds that Alstad has been interned by the Germans, and Kari has brought shame on herself by getting engaged to the traitorous Gunter. However, when at a "Norwegian-German friendship dance" the Germans arrive to demand Metcalfe's papers, Kari saves her by inciting a riot and hiding him at her house. There she reveals she only took on the engagement to obtain her father's release.

Alstad is released and agrees to help Metcalfe to signal to British bombers with torches to guide them in on their raid on it, and Kari and Metcalfe bid a romantic farewell. The signalling is successful and the base destroyed, but Alstad is shot. Metcalfe returns to tell Kari the news, just as Gunter and the Germans take 8 random hostages who will be shot if the British spy they are sheltering is not given up. Metcalfe overhears this, and gives himself up. Gunter returns to Kari to try to save her from the firing squad she too will face for sheltering the spy, but she refuses and is locked up with the hostages, though Gunter shows her the kindness of not separating her from Metcalfe. They prepare to die, and the first party for the firing squad are taken out, but then a British commando raid arrives. In the chaos, Gunter is shot by the Kommandant as the latter makes a hasty escape, and the hostages are all freed unharmed. The raiders capture the town and its German garrison and then leave almost immediately, taking Metcalfe, Kari, the hostages and their families to safety in England.