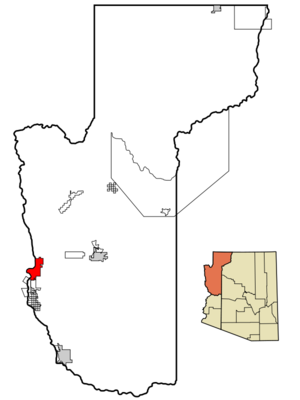 mapsize =
map_caption = Location in and the state of

Bullhead City is a city located on the Colorado River in Mohave County, , USA, roughly 100 miles (160.9 km) south of Las Vegas, , and directly across the from , whose casinos and ancillary services supply much of the employment for Bullhead City. According to 2006 Census Bureau estimates, the population of the city is 40,225.

Bullhead City has a climate, with a few es of precipitation year-round. It is one of the 's hottest cities during the summer, with an average July high of 110 to 115 (but has been known to reach 125+) degrees or 48 to 49 degrees. The month with the most average precipitation is August, with 0.99 or 25 s.

Bullhead City's Elementary schools and Junior High schools are operated by the . These schools include , , , , , , , and

Bullhead City's High school Mohave High School and , are operated by the .

The town was originally known as "Hardyville," named after William Harrison Hardy, who worked as a postmaster, county supervisor and a member of the Territorial Legislature. When the railroad bypased the town, it quickly became a ghost town until the construction of the . The name "Bullhead City" is taken from "Bull's Head Rock," a rock formation along the Colorado River. [http://www.topozone.com/map.asp?lon=-114.573&lat=35.2047] Steam boats on the Colorado River used it as a navigation point. After the construction of Davis Dam, the water rose and now almost completely covers the landmark. [http://www.bullheadcity.com/tourism/history.asp]

* [http://www.weather.com/activities/homeandgarden/home/weather/climo-monthly-graph.html?locid=USAZ0023&from=36hr_bottomnav_home From "The Weather Channel"]