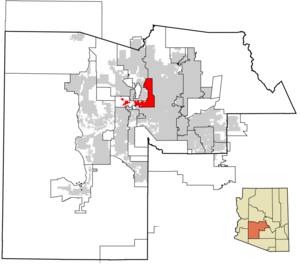 Glendale (pron-en|ˈglɛndeɪl) is a city in Maricopa County, , USA, located about nine miles northwest from . According to 2006 Census Bureau estimates, the population of the city is 246,531.

Glendale bills itself as “Arizona’s Antique Capital,” with support for its claim from both Sunset Magazine ( [http://www.sunset.com/sunset/travel/article/0,20633,710517,00.html 2004] ) and a 1998 article in USA Today. Glendale is home to the popular mall in the northwest part of the city. Glendale also is home to the metro Phoenix area's first medical school, Midwestern, as well as a major post-graduate international business school, the .

The city will have an extension of the Valley Metro light rail transit line which has a scheduled completion date of 2011.

There were 75,700 households out of which 39.9% had children under the age of 18 living with them, 53.5% were married couples living together, 12.8% had a female householder with no husband present, and 28.2% were non-families. 21.3% of all households were made up of individuals and 5.8% had someone living alone who was 65 years of age or older. The average household size was 2.85 and the average family size was 3.33.

Glendale is the home to the of the (NFL). The team formerly played at on the campus of in nearby Tempe, and in 2006 began playing at . Designed by renowned architect Peter Eisenmann, the stadium was featured on TV series, "" because of its roll-out natural grass field. The stadium hosted in 2008.

(formerly Glendale Arena) is adjacent to University of Phoenix Stadium, and is the home of the of the (NHL), as well as the of the (NLL).

In 2009, the and the are scheduled to share a new spring training complex and stadium in Glendale.

Many serve the city of Glendale.