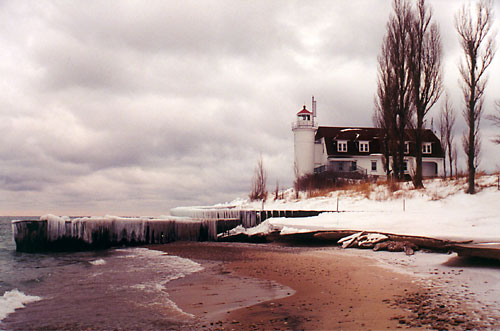 The light was originally equipped with a Fourth Order (pronounced [freɪ'nel] ) with bullseye, which was upgraded to a Third order (with bullseye) in 1880. The latter was visible for 27.5 miles, because of the high placement of the tower (focal plane of 52.5 feet) and the efficacy of the lens design. [See [http://www.terrypepper.com/lights/closeups/illumination/fresnel/3order.htm Third Order Fresnel lens, Terry Pepper, Seeing the Light.] ] The Fresnel Lens was removed in 1996, and there are plans to display it [ [http://www.nps.gov/history/maritime/light/ptbetsie.htm National Park Service, Inventory of historic light stations, Point Betsie.] ] at . [ [http://www.sleepingbeardunes.com/ Sleeping Bear Dunes National Lake Shore Visitors Bureau.] ] .

The cylindrical tower is 39 feet tall, but sits on a dune. It is attached to the s house, which was upgraded to an attractive design. [ [http://www.terrypepper.com/Lights/michigan/betsie/betsie.htm Seeing the Light, Terry Pepper on Point Betsie Light] ]

Prior to being automated in 1983, the 'wickies' operated the light for 106 years. [ [http://www.pointbetsie.org/ Friends of the Point Betsie Light.] ] This was the last manned lighthouse on Lake Michigan. [ [http://lighthouse.boatnerd.com/gallery/Michigan/PtBetsie.htm Wobser, David, Point Betsie Light at Boatnerd.com.] ] The light is now a Vega VRB-25 250 mm acrylic optic. [ [http://www.terrypepper.com/Lights/michigan/betsie/betsie.htm Seeing the Light, Terry Pepper on Point Betsie Light.] ] The new optic would be visible for a range of 15 to 22 miles, depending on the bulb used. [ [http://www.terrypepper.com/Lights/closeups/illumination/acrylic/VRB-25/index.htm Vega VRB-25 250 mm acrylic optic, Terry Pepper, Seeing the Light.] ]

In addition to the lighttower, keepers house, and lifesaving station, the site presently includes a building and an oil house. [ [http://lighthouse.boatnerd.com/gallery/Michigan/PtBetsie.htm Wobser, David, Point Betsie Light at Boatnerd.com.] ]

Fog signals have received much attention at Point Betsie. In the autumn of 1912, the fog signal buiidlng was rebuilt. The 10-inch were replaced by 10-inch chime whistles. Meanwhile, the lamp was upgraded to an incandescent oil vapor system, with an intensity of 55,000 candlepower. In 1921, upon being connected to the electrical power grid, aa 110-volt electric bulb was installed, and the fog signal upgraded to twin Type "G" , driven by electric air compressors. The diaphone doubled the audible radius, and had the added benefit that it could be brought on line immediately, without waiting fgor steam engines to build presser. The following April the fog signal's characteristic was changed to a group of two blasts every 30 seconds. [ [http://www.terrypepper.com/Lights/michigan/betsie/betsie.htm Terry Pepper, Seeing the Light on Point Betsie Light.] ]

The light is located on , which in turn is part of a recognized terrestrial marine near shore ecosystem, dominated by a coastal dune with unique flora and fauna, including Pitcher's Thistle, Lake Huron Locust, and fascicled broomrape. [ [http://www.scribd.com/doc/1647609/Environmental-Protection-Agency-Land-by-the-Lakes-Nearshore-Terrestrial-Ecosystems Reid, Ron & Holland, Karen, Environmental Protection Agency.] ]

Welcome to Point Betsie Lighthouse. The lighthouse, formerly the Point Betsie Lifesaving Station, was built in 1876. It began operation on April 23, 1877, and was manned and maintained by the U.S. Lighthouse Service. On July 1, 1939 the lighthouse service was merged with the U.S. Coast Guard. The lighthouse, manned for over 106 years was automated in April 1983. The light is 52 feet above lake level and has a range of 27.5 miles. The house was converted to apartments and now serves as housing for families of personnel assigned to Coast Guard station, Frankfort.

The station was transferred to under the terms of the in 2004.

It has been repainted to its original color scheme, which had not been seen since the 1940s. The "Friends of Point Betsie Lighthouse" have undertaken a complete restoration of the station. [ [http://www.pointbetsie.org/ Friends of the Point Betsie Light.] ]

The organization is celebrating the lighthouse's sesquicentenial in 2008. This 150th anniversary celebration will include many events. A calendar is available. [ [http://www.pointbetsie.org/ Friends of the Point Betsie Light.] ]

Point Betsie is said to be one of America's most photographed lighthouses, and the most-visited attraction in Benzie County. [ [http://www.michiganlighthouse.org/bibliography.html Bibliography on Michigan lighthouses.] ] Because of its picturesque form and location, it is often the subject of photographs and drawings. [ [http://home.rochester.rr.com/mjm/light2.html Mulgrew, Marilyn, Drawing of Point Betsie Light.] ] Even needlepoint illustrations have been rendered. [ [https://www.dataleap.com/secure/pin/orderpage.htm Needlepoint of Point Betsie Light.] ]

It is listed on the , Reference #84001375. [ [http://www.pointbetsie.org/lighthouse.html Point Betsie lighthouse facts, Friends of Point Betsie.] ]