The Muskegon Pier Light is a lighthouse located in the harbor of Muskegon, Michigan.

The site is accessible but the lighthouse is close to the public. 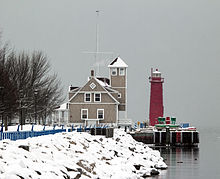 In 2008 the lighthouse became available for transfer under NHLPA, and in June 2010 ownership was transferred to the Michigan Lighthouse Conservancy.[3]