The Menominee North Pier lighthouse is located in the harbor of Menominee, Michigan. The station was established in 1877. The current structure and its still operational light was first lit in 1927, and automated in 1972.[1] It is also sometimes called the "Menominee (Marinette) North Pierhead Light".[2]

The foundation is a concrete pier. The 34-foot (10 m) tall octagonal cast iron building is marked in a distinctive red, with a black lantern and white base. A Fourth Order Fresnel lens was originally installed, but was replaced with a modern 300 mm. acrylic optic lens.[3] The original lens is now at Sand Point Light in Escanaba, Michigan.[4] The focal plane is 46 feet.[5]

The building originally had a diaphone fog signal structure attached, and it was later removed. The iron catwalk was removed in 1972 when the light was automated.[6]

This light is paired with a large rear range light.[7] That is denominated the Menominee (Marinette) North Pier light, and is also an active aid to navigation. Its focal plane 59 ft (18 m), and its characteristic is a continuous red light. The tower is a 50 ft (15 m) square pyramidal steel skeletal tower with gallery. It is painted red, and located on the Menominee North Pier about 600 ft (180 m) from the pierhead light.[8] It may be accessed by walking the pier. The site is open, but the tower is closed. U.S. Coast Guard. USCG 7-21940.[2]

US 41 enters Menominee and makes a 90 degree turn onto 10th Street (heading east to west) as it passes through downtown. Go east on 10th Street towards Lake Michigan to 1st street. Turn south onto 1st Street, then turn east onto Harbor Drive. Harbor Drive parallels the lakeshore, ending at a parking lot. A short walk on a wooden walkway leads to the large, flat breakwater.[9] 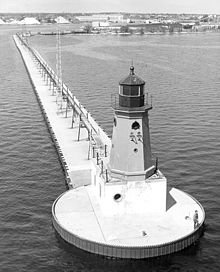 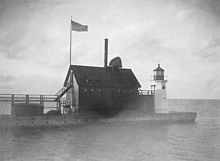