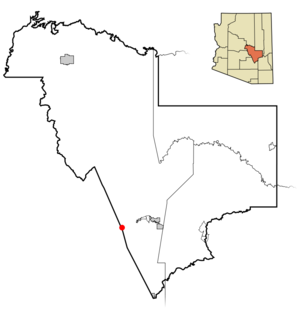 mapsize = 250px
map_caption = Location in Gila County and the state of

Eight miles west of Miami is a divide between Miami and Superior at the 4600 foot level. This area is known as the Pinal Ranch or sometimes it is called the Top-of-the-World. It derives its Indian name from the Pinal Apaches or "pine groves in the mountains."

The site was abandoned in 1871 by the army one month after being named Camp Pinal. The troops started their mule trail at "Infantry Camp" at the foot of Picket Post and then extended it into Picket Post Creek (later called Queen Creek). The trail then crossed Devil's Canyon (named by the troops) and halted at a post they intended to build in what was then called "Mason's Valley" (later, Camp Pinal. By April 1871 the mule trail and post were both completed and General Stoneman planned on making Camp Pinal his headquarters, but the project was abandoned after General George Crook replaced General Stoneman because of the Camp Grant Massacre of April 1871. By August of that year General Crook abandoned the post, and only the mule trail was left to indicate the intended ambitious presence of U.S. soldiers.

The Top-of-the-World was a dance hall started in the 1920's along the old highway east of the Pinal Ranch. This area was settled by Robert A. Irion in 1878. His stepson Dudly Craig continued the ranching tradition in the area after Irion's death.

There were 130 households out of which 31.5% had children under the age of 18 living with them, 50.0% were married couples living together, 10.0% had a female householder with no husband present, and 36.2% were non-families. 31.5% of all households were made up of individuals and 10.8% had someone living alone who was 65 years of age or older. The average household size was 2.45 and the average family size was 3.07.