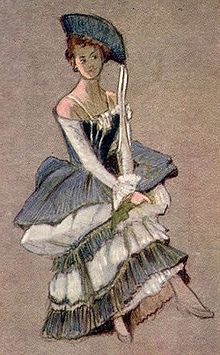 Costume design for Gianetta - The Gondoliers

Costume design is the fabrication of apparel for the overall appearance of a character or performer. This usually involves researching, designing and building the actual items from conception. Costumes may be for a theater or cinema performance but may not be limited to such. Costume design should not be confused with Costume coordination which merely involves altering existing clothing.

Designs are first sketched out and approved, then either draped on a form or a pattern drafted. Along with the fabricated portion, the costume may require accessories such as footwear, hats and head dresses for the actors to wear, but it may also include designing masks, makeup, wigs, underwear or other unusual specialty items, such as the full body animal suits for the characters in the musical Cats (designed by John Napier, winner of the 1983 Tony Award for Best Costume Design). Costumes budgets will generally be as high a cost as other departments or theatrical needs such as set design.

In its earliest form, costumes consisted of theatrical prop masks from the time of the ancient Greeks. Costume design evolved as the need for more elaborate and detailed characterizations were needed as the performances became more intricate and more complex characters began to emerge on stage. Defining each character separately allowing the audience the ability to follow a storyline with a conceptualised look defined prior to a performance was, and is needed as part of preproduction preparations.

Early performers were generally male, therefore costuming was needed for gender disguise so as to create the illusion of the opposite sex. In Asia, the men would dress up as women. Costuming also helps create other character building imagery such as age. The leading characters will have more detail and design to make them stand out and relate a sense of trust to the audience. Styles and technique has changed over the centuries but have maintained basic principles of clothing design yet geared towards pushing the characters traits out in its appearance. The designer meets the cast, measuring each performer and making certain that the costumes will be appropriate for each individual. 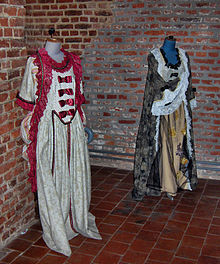