Mary of Egypt (ca. 344 – ca. 421) is revered as the patron saint of penitents, most particularly in the Eastern Orthodox, Oriental Orthodox, and Eastern Catholic churches, as well as in the Roman Catholic and Anglican churches.

The primary source of information on Saint Mary of Egypt is the Vita written of her by St. Sophronius, the Patriarch of Jerusalem (634 - 638). Most of the information in this section is taken from this source.

Saint Mary, also known as Maria Aegyptica, was born somewhere in Egypt, and at the age of twelve ran away to the city of Alexandria where she lived an extremely dissolute life, prostituting herself.[3] In her Vita she states that she often refused the money offered for her sexual favors as she was driven "by an insatiable and an irrepressible passion," and that she mainly lived by begging, supplemented by spinning flax. 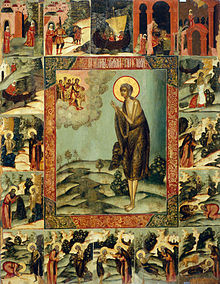 Icon of Saint Mary of Egypt, surrounded by scenes from her life (17th century, Beliy Gorod).

After seventeen years of this lifestyle, she travelled to Jerusalem for the Feast of the Exaltation of the Holy Cross. She undertook the journey as a sort of "anti-pilgrimage," stating that she hoped to find in the pilgrim crowds at Jerusalem even more partners in her lust. She paid for her passage by offering sexual favors to other pilgrims, and she continued her habitual lifestyle for a short time in Jerusalem. Her Vita relates that when she tried to enter the Church of the Holy Sepulchre for the celebration, she was barred from doing so by an unseen force. Realizing that this was because of her impurity, she was struck with remorse, and on seeing an icon of the Theotokos (the Virgin Mary) outside the church, she prayed for forgiveness and promised to give up the world (i.e., become an ascetic). Then she attempted again to enter the church, and this time was permitted in. After venerating the relic of the true cross, she returned to the icon to give thanks, and heard a voice telling her, "If you cross the Jordan, you will find glorious rest/ true peace." She immediately went to the monastery of St. John the Baptist on the bank of the River Jordan, where she received absolution and afterwards Holy Communion. The next morning, she crossed the Jordan and retired to the desert to live the rest of her life as a hermit in penitence. She took with her only three loaves of bread, and once they were gone, lived only on what she could find in the wilderness.

Approximately one year before her death, she recounted her life to St. Zosimas of Palestine[4] who encountered her in the desert. When he unexpectedly met her in the desert, she was completely naked and almost unrecognizable as human. She asked Zosimas to toss her his mantle to cover herself with, and then she narrated her life's story to him, manifesting marvellous clairvoyance. She asked him to meet her at the banks of the Jordan on Holy Thursday of the following year, and bring her Holy Communion. When he fulfilled her wish, she crossed the river to get to him by walking on the surface of the water and received Holy Communion, telling him to meet her again in the desert the following Lent. The next year, Zosimas travelled to the same spot where he first met her, some twenty day's journey from his monastery, and found her lying there dead. According to an inscription written in the sand next to her head, she had died on the very night he had given her Communion and had been somehow miraculously transported to the place he found her, and her body preserved incorrupt. He buried her body with the assistance of a passing lion. On returning to the monastery he related her life story to the brethren, and it was preserved among them as oral tradition until it was written down by St. Sophronius. 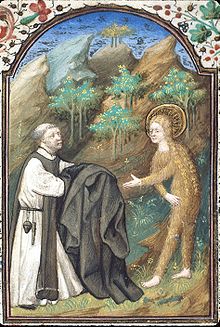 Icon of Mary of Egypt, covered in golden hair, being handed a cloak by Zosimas, French, 15th century (British Library)

There is disagreement among various sources regarding the dates of St. Mary's life. The dates given above correspond to those in the Catholic Encyclopedia. The Bollandists place her death in 421, others give the date of her death as 522 (see Orthodox Wiki article, below), or 530 (see Prolog from Ohrid, April 1). The only clue given in her Vita is the fact that the day of her repose was April 1, which is stated to be Holy Thursday, meaning that Easter fell on April 4 that year.

It is notable that the Synaxarion states that Zosimas lived during the reign of the Emperor Theodosius the Younger,[8] who reigned from 408 to 450. According to tradition, Zosimas lived almost a hundred years, dying in the sixth century, and the Vita states that he was fifty-three years old when he met St. Mary. 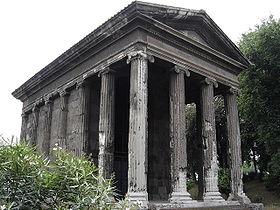 The Temple of Portunus in Rome was preserved by being rededicated to Saint Mary of Egypt in 872.

In iconography St. Mary of Egypt is depicted as a deeply tanned, emaciated old woman with unkempt gray hair, either naked or covered by the mantle she borrowed from Zosimas. She is often shown with the three loaves of bread she bought before undertaking her journey into the desert.

Her feast day is kept by the Orthodox according to the Fixed Cycle on April 1. On the Moveable Cycle the Orthodox Church also commemorates her on the fifth Sunday of Great Lent,[9] on which day it is customary for the priest to bless dried fruit after the Divine Liturgy. The Life of St. Mary by St. Sophronius is appointed to be read during the Matins of the Great Canon of St. Andrew of Crete on the preceding Thursday.

In the Roman Catholic Church, she is commemorated on April 3 (or April 2, according to the Roman Martyrology). Although she is venerated by Anglicans, St. Mary of Egypt does not appear on Anglican Church Calendars.

There is a chapel dedicated to her at the Church of the Holy Sepulchre in Jerusalem, commemorating the moment of her conversion. 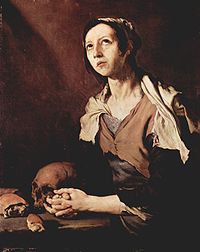 In Goethe's Faust Mary of Egypt is one of the three penitent saints who pray to the Virgin Mary for forgiveness for Faust. Her words are set by Mahler in his 8th Symphony as the final saint's appeal to the Mater Gloriosa.

In Ben Jonson's play Volpone (1606) one of the characters uses the expression "Marry Gip". Commentators have taken this to mean "Mary of Egypt".

Mary of Egypt is the subject of operas by Ottorino Respighi and Sir John Tavener, the latter written in 1992 for the Aldeburgh Festival.