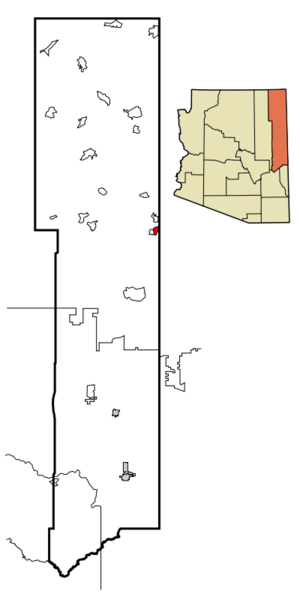 Window Rock is the seat of government for the , the tribal government of the largest Native American tribe in the United States, and contains the . Even though the state of Arizona does not currently observe Daylight Time, the Navajo reservation does.

There were 876 households out of which 51.0% had children under the age of 18 living with them, 43.7% were married couples living together, 29.7% had a female householder with no husband present, and 18.6% were non-families. 15.6% of all households were made up of individuals and 2.4% had someone living alone who was 65 years of age or older. The average household size was 3.42 and the average family size was 3.81.

The 61st Annual was held from September 4th to 9th 2007 in the heart of the Navajo Nation capital. The IJNFR, NCRA, and other rodeo cicuits are held at the Dean C. Jackson Memorial Arena. There is a 1/2 mile midway from the carnival south west to the arena. The Raymond Nakai Hall is full of information similar to a . The Gorman Exhibit halls shows all the entry of the years arts and crafts and their awards. There is a frybread contest at the Hazel Yazza Pavilion, authentic Navajo cooking at the Circlr of Life Pavilion, a Navajo Song N' Dance at the Song n Dance Arena. There is the famous Window Rock Powwow held at its designated arena. Many events take place.

Window Rock is a part of .

* [http://www.city-data.com/city/Window-Rock-Arizona.html Window Rock profile, with more links to the most interesting sites about Tségháhoodzání and the Dinétah] Mapit-US-cityscale|35.672752|-109.062097