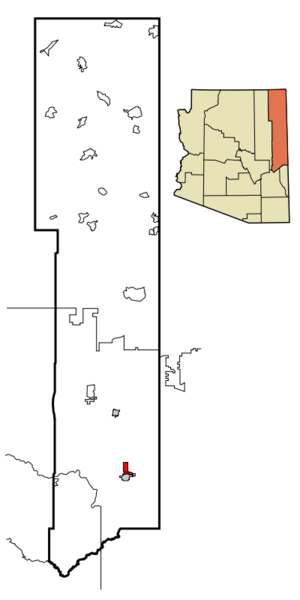 Springerville is a town in Apache County, , within the White Mountains. Its postal is 85938. According to 2006 Census Bureau estimates, the population of the town is 1,956.

The town growing around Henry Springer's trading post was officially given its name , [http://www.roundvalleyaz.com/page1.html] . Before that time it had gone by names such as Colorado Chiquito, Milligan Settlement, and Valle Redondo (Round Valley). It was incorporated in . Springerville sits at an elevation of 6,974 feet. Along with its neighbor Eagar, both communities make up the place known as Round Valley which is in the northeastern part of Arizona close to the border.

There were 753 households out of which 34.3% had children under the age of 18 living with them, 50.6% were married couples living together, 11.2% had a female householder with no husband present, and 33.7% were non-families. 30.1% of all households were made up of individuals and 14.7% had someone living alone who was 65 years of age or older. The average household size was 2.55 and the average family size was 3.18.

The town is served by the . The school's mascot is the and its school colors are and . The St. Johns s are the school's biggest rival.

Round Valley Primary School is located in the town and serves the town.

Round Valley Intermediate School, Round Valley Middle School, and serve the town are in nearby Eagar. In addition, White Mountain Academy, a K-12 charter school, is located in Eagar.

The high school's football stadium, The Round Valley Ensphere located in Eagar, is the eighth biggest in the with a diameter of 440 feet / 134 m. The school board voted to give the Dome a pinkish looking color, and it was completed in . It was used as a shelter for evacuees from the in . Round Valley is the only high school in the world to have a domed stadium.

In -- the Springerville, Eagar, Vernon, Nutrioso, Greer, and Colter Schools consolidated with each other to form the Round Valley Unified School District.

is located near Springerville. It is a nationally recognized archeological site. [http://www.delange.org/CasaMalpais1/CasaMalpais.htm]

The name Casa Malpais means House of the Badlands, which was given to the site by early Basque sheepherders who referred to the surrounding volcanic lava field as "badlands." The contains over 400 within a fifty mile radius of Springerville, making it the third largest volcanic field in the continental .

The first visit to Casa Malpais by a professional was in , when , an anthropologist living at Zuni, visited a site at "El Valle Redondo on the Colorado Chiquito", and was impressed by what he termed "the fissure type " he found there. In his journal he sketched dry masonry, bridging fissures, upon which the pueblo is constructed.

Unique and unusual features characterize the site. The Great , painstakingly constructed of volcanic rock, is the centerpiece. A steep staircase set into a crevice of the high red cliff wall leads to the top of the mesa.

Both the and Indian tribes still consider Casa Malpais a sacred ancestral place.

The town contains one of the twelve "" monuments created by sculptor . [http://www.route40.net/history/madonnas/az.shtml]

* : A former professional football player for the .

* , a major player in the events that led to the , was shot dead in Springerville by a detective named Jonas V. Brighton for resisting arrest on charges of cattle-rustling on . [http://www.roundvalleyaz.com/acc1.html] [http://clantongang.com/oldwest/gangike.html]

:"I was the one who had Apache county separated from Yavapai. Everything was very high at that time, and I used to haul my goods from Albuquerque to live on. I was hauling goods one time from Henry Springer's store in Albuquerque, and I told Henry Springer he had better come into Round Valley, as it was called then, and put in a store; that the people were coming in and we would name the postoffice and little village after him, Springerville, and that was old Henry Springer. ":——James G. H. Colter from [http://southwest.library.arizona.edu/hav6/body.1_div.14.html History of Arizona, Volume VI]