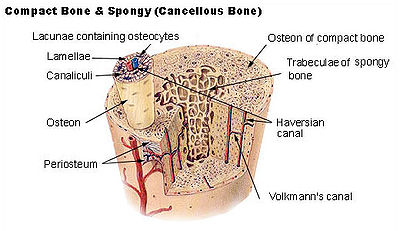 The osteon, or Haversian system, is the fundamental functional unit of much compact bone. Osteons, roughly cylindrical structures that are typically several millimeters long and around 0.2mm in diameter,[1] are present in many of the bones of most mammals, birds, reptiles, and amphibians.

Each osteon consists of concentric layers, or lamellae, of compact bone tissue that surround a central canal, the Haversian canal. The Haversian canal contains the bone's nerve and blood supplies. The boundary of an osteon is the cement line.

Between adjoining osteons there are angular intervals that are occupied by interstitial lamellae. These lamellae are remnants of osteons the greater parts of which have been destroyed. Near the surface of the compact bone the lamellae are arranged parallel to the surface; these are called circumferential lamellae. Some of the osteoblasts develop into osteocytes, each living within its own small space, or lacuna. Osteocytes make contact with the cytoplasmic processes of their counterparts via a network of small canals, or canaliculi. This network facilitates the exchange of nutrients and metabolic waste.

Collagen fibers in a particular lamella run parallel to each other but the orientation of collagen fibers within other lamellae is oblique. The collagen fiber density is lowest at the seams between lamellae, accounting for the distinctive microscopic appearance of a transverse section of osteons.

Osteons are separated from each other by interstitial lamellae between systems.

The space between osteons is occupied by interstitial lamellae, which are the remnants of osteons that were partially resorbed during the process of bone remodelling.

Osteons are connected to each other and the periosteum by oblique channels called Volkmann's canals.

Use in archaeology and forensics

Osteons carry their history so that given the right conditions they can be used to "read" the sex[2] and age, as well as aspects of health history, motor history[3] and diet of an individual whose bone is being studied. Osteons and their arrangement also vary according to taxon, so that genus and sometimes species can be differentiated using a bone fragment not otherwise identifiable.[4] This is of use especially in archaeology, paleontology and forensics.

Drifting osteons are a phenomenon that is not fully understood. A "drifting osteon" is classified as one that runs both longitudinally as well as transversely through the cortex. An osteon can "drift" in one direction or change directions several times, leaving a tail of lamellae behind the advancing haversian canal.[5]