Tai Wai (English pronunciation: /ˌtaɪ ˈwaɪ/) is an area in the New Territories of Hong Kong, located between Sha Tin New Town and the Lion Rock. It is the largest part of the Sha Tin District.[citation needed]

With an MTR station serving two lines, 5 bus termini and several tunnels and roads connecting it to other parts of the New Territories, Kowloon and Tsuen Wan, Tai Wai is an important transportation node in Hong Kong. 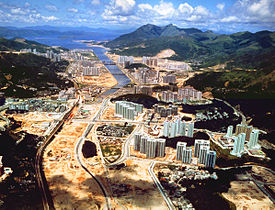 View of Sha Tin New Town under development in 1983, with Tai Wai area in the foreground.

Sprouting from traditional Chinese farming villages growing rice, Tai Wai area once functioned as a light suburban industrial park in the 1970s. Few factory buildings are still in use, mostly as warehouses. The current urbanization of the area is the consequence of the development of Sha Tin New Town.

The Wai family, being the largest family, is thought to be the direct descendants of the famous founder general of the Han Dynasty, Han Xin, who purportedly fled there to escape executions ordered by Emperor Gao of Han's empress Empress Lü Zhi. The Han descendants changed their surname into Wai by splitting the word Han (韓) in two halves and took up the character on the right hand side.

The Cheng family, on the other hand, originated from a place called Xingyang in Zhengzhou, Henan which is the place where Chang'e supposedly flew to the Moon. It is also the birth place of Li Shangyin, one of the most famous poets in the late Tang Dynasty.

Tai Wai New Village, located on a slope alongside Tai Po Road, just minutes walk away from the old village, was established in the 1980s as the then colonial government's effort to compensate the villagers for effectively confiscating their land for development. Each male villager was given a piece of land of which he has the right to build a Spanish styled three story house to live in. Most of these houses are now rented by outsiders for the relatively tranquil countryside surroundings. 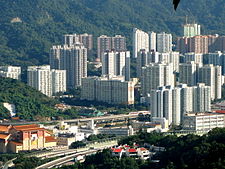 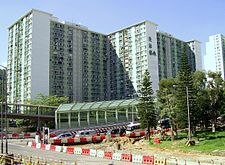 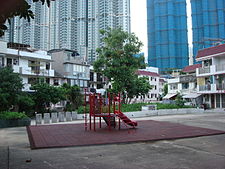 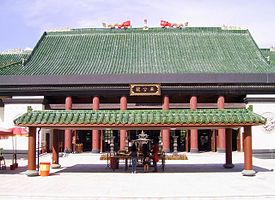 Hundreds of thousands flock to the Taoist Che Kung Temple on the 2nd day of each Chinese New Year to worship Che Kung - a general of the Song Dynasty, and queue up to turn the wheel which symbolizes both the cosmic movement in the turning of the year and the hope of each wheel spinner for a good turn of fortune in the forthcoming year.

Another temple located in the Tai Wai walled village, namely Hou Wong Temple, is popular among the Sha Tin locals. 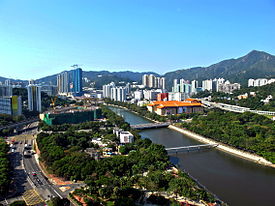 View of Tai Wai and the Shing Mun River. Che Kung Temple Station is visible on the left and the Hong Kong Heritage Museum on the right 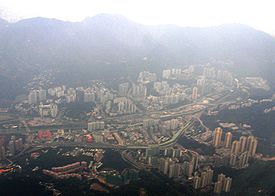 Tai Wai is most remembered for its former cycling park. Beginners could practice their cycling skill within the park while the more advanced riders could cycle alongside the Shing Mun River all the way to Tai Po. The journey would typically take half a day on the scenic route. The park was demolished in 2001 to make way for the railway terminus of the Ma On Shan Line.

Apart from cycling, hiking is also a popular activity in Tai Wai. Situated in a valley, it is surrounded by country parks in the north, south and west direction, namely the Kam Shan, Lion Rock and Shing Mun country park respectively. One could hike along the Wilson Trail or MacLehose Trail.

There are 2 public sport centres in Tai Wai, making up 40% of the total number of centres in Sha Tin.[3] They both located in 2 rather large as well as major estates in Tai Wai, namely Mei Lam Estate and Hin Keng Estate. The two sport centres offer a wide range of facilities including a fitness centres with weight training and cardiovascular equipments, squash courts as well as badminton courts. These sport centres are owned and operated by the Leisure and Cultural Services Department, however the facilities are charged prior to booking with several exceptions.[4][5]

Some sources mention Tai Wai as being famous for its chicken porridges and roast baby pigeon.[6]

Tai Wai has tens of primary and secondary schools, mostly public, some with religious background. They include: 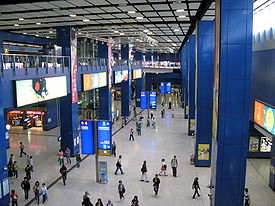 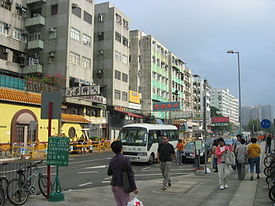 Tai Wai near the MTR station 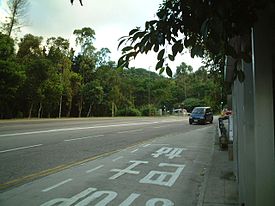 Tai Wai has a station on the East Rail Line, which is also a terminus for the Ma On Shan Line. It is very close to other interchange stations, where passengers may then change to other lines and go to places all over Hong Kong (within the MTR network). Northwards is Lo Wu and Lok Ma Chau, cross-border to Shenzhen, only 30 minutes away.[7] The station was opened in 1983 and its expansion for the Ma On Shan Line was completed in September 2004.

Bus links at Tai Wai are both convenient and affordable. A large percentage of the bus routes that go past Tai Wai are circular routes which both start and terminate in Sha Tin. There are also long-distance routes that go past famous Hong Kong landmarks and attractions. They include 170, which goes to Ocean Park; E42 goes to the airport (via Tung Chung)[8] and R42 to Disneyland.

There are 5 major bus termini in Tai Wai :

Many green minibus (GMB) routes that pass Tai Wai go around all parts of Sha Tin to provide feeder services for major public transport operators such as the MTR. Routes such as 481B go to the Tsuen Wan area via Shing Mun Tunnel offering an fast but cheap alternative to buses and the MTR. Residents' buses also operate at Tai Wai Station. Union Hospital's free shuttle bus also operates from there at 10 minute frequencies.

Connections to other parts of Hong Kong

The tunnels, built in the late twentieth century, are Shing Mun Tunnels, Lion Rock Tunnel and Sha Tin Heights Tunnel respectively. Sha Tin Heights Tunnel opened in March 2008 to lessen the traffic of the Kowloon Tunnels and Tai Po Road. The tunnel also offers an alternative route to the airport over the Stonecutters Bridge and through the Nam Wan Tunnel via Route 8. 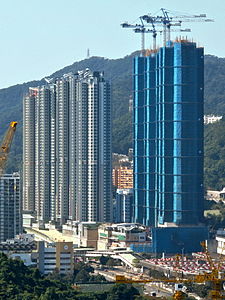 Final stages of the construction of Festival City, in 2010.

Festival City, a HK$20 billion residential-commercial development project by Cheung Kong, and located above the Tai Wai (Station) Maintenance Centre, is as of 2011 in the final stages of construction. The plan is to build 12 50-stories high residential towers with a total construction area of 313,955 square meters as well as 25,890 square meters for the general public's use. When completed, it will offer 4,304 flats to families, two schools and one community facility. This residential project will raise the population of Tai Wai significantly. The controversy of this project is that the 12 towers would create an urban heat island effect and block off the air flow of the area.[9][10]

In 2002 KCRC won the bid to plan, build and operate the Shatin to Central Link,[11] and in 2004 it submitted the Draft Final Proposal to the Government. The proposal included the extension of East Rail Line across Victoria Harbour to Hong Kong Island and the extension of Ma On Shan Line to West Rail Line via East Kowloon. This project will start construction in 2010 while the Tai Wai to Hung Hom section will be completed in 2015 and Cross Harbour section to be completed in 2019.[12] This project will definitely secure the importance of Tai Wai as a transport hub of Hong Kong.